Visions and Revisions A Book of Literary Devotions 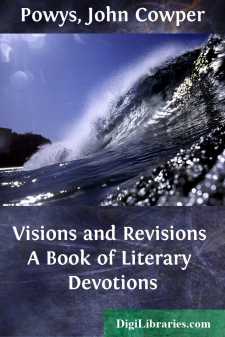 What I aim at in this book is little more than to give complete reflection to those great figures in Literature which have so long obsessed me. This poor reflection of them passes, as they pass, image by image, eidolon by eidolon, in the flowing stream of my own consciousness.

Most books of critical essays take upon themselves, in unpardonable effrontery, to weigh and judge, from their own petty suburban pedestal, the great Shadows they review. It is an insolence! How should Professor This, or Doctor That, whose furthest experiences of "dangerous living" have been squalid philanderings with their neighbours' wives, bring an Ethical Synthesis to bear that shall put Shakespeare and Hardy, Milton and Rabelais, into appropriate niches?

Every critic has a right to his own Aesthetic Principles, to his own Ethical Convictions; but when it comes to applying these, in tiresome, pedantic agitation, to Edgar Allen Poe and Charles Lamb, we must beg leave to cry off! What we want is not the formulating of new Critical Standards, and the dragging in of the great masters before our last miserable Theory of Art. What we want is an honest, downright and quite personal articulation, as to how these great things in literature really hit us when they find us for the moment natural and off our guard—when they find us as men and women, and not as ethical gramaphones.

My own object in these sketches is not to convert the reader to whatever "opinions" I may have formulated in the course of my spiritual adventures; it is to divest myself of such "opinions," and in pure, passionate humility to give myself up, absolutely and completely, to the various visions and temperaments of these great dead artists.

There is an absurd notion going about, among those half-educated people who frequent Ethical Platforms, that Literary Criticism must be "constructive." O that word "constructive"! How, in the name of the mystery of genius, can criticism be anything else than an idolatry, a worship, a metamorphosis, a love affair! The pathetic mistake these people make is to fancy that the great artists only lived and wrote in order to buttress up such poor wretches as these are upon the particular little, thin, cardboard platform which is at present their moral security and refuge.

No one has a right to be a critic whose mind cannot, with Protean receptivity, take first one form and then another, as the great Spells, one by one, are thrown and withdrawn.

Who wants to know what Professor So-and-so's view of Life may be? We want to use Professor So-and-so as a Mirror, as a Medium, as a Go-Between, as a Sensitive Plate, so that we may once more get the thrill of contact with this or that dead Spirit. He must keep his temperament, our Critic; his peculiar angle of receptivity, his capacity for personal reaction. But it is the reaction of his own natural nerves that we require, not the pallid, second-hand reaction of his tedious, formulated opinions. Why cannot he see that, as a natural man, physiologically, nervously, temperamentally, pathologically different from other men, he is an interesting spectacle, as he comes under the influence first of one great artist and then another, while as a silly, little, preaching school-master, he is only a blot upon the world-mirror...!