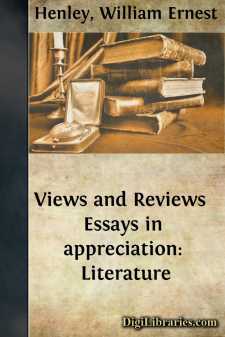 DICKENS A ‘Frightful Minus’

Mr. Andrew Lang is delightfully severe on those who ‘cannot read Dickens,’ but in truth it is only by accident that he is not himself of that unhappy persuasion.  For Dickens the humourist he has a most uncompromising enthusiasm; for Dickens the artist in drama and romance he has as little sympathy as the most practical.  Of the prose of David Copperfield and Our Mutual Friend, the Tale of Two Cities and The Mystery of Edwin Drood, he disdains to speak.  He is almost fierce (for him) in his denunciation of Little Nell and Paul Dombey; he protests that Monks and Ralph Nickleby are ‘too steep,’ as indeed they are.  But of Bradley Headstone and Sydney Carton he says not a word; while of Martin Chuzzlewit—but here he shall speak for himself, the italics being a present to him.  ‘I have read in that book a score of times,’ says he; ‘I never see it but I revel in it—in Pecksniff and Mrs. Gamp and the Americans.  But what the plot is all about, what Jonas did, what Montague Tigg had to make in the matter, what all the pictures with plenty of shading illustrate, I have never been able to comprehend.’  This is almost as bad as the reflection (in a magazine) that Jonas Chuzzlewit is ‘the most shadowy murderer in fiction.’  Yet it is impossible to be angry.  In his own way and within his own limits Mr. Lang is such a thoroughgoing admirer of Dickens that you are moved to compassion when you think of the much he loses by ‘being constitutionally incapable’ of perfect apprehension.  ‘How poor,’ he cries, with generous enthusiasm, ‘the world of fancy would be, “how dispeopled of her dreams,” if, in some ruin of the social system, the books of Dickens were lost; and if The Dodger, and Charley Bates, and Mr. Crinkle and Miss Squeers and Sam Weller, and Mrs. Gamp, and Dick Swiveller were to perish, or to vanish with Menander’s men and women!  We cannot think of our world without them; and, children of dreams as they are, they seem more essential than great statesmen, artists, soldiers, who have actually worn flesh and blood, ribbons and orders, gowns and uniforms.’  Nor is this all.  He is almost prepared to welcome ‘free education,’ since ‘every Englishman who can read, unless he be an Ass, is a reader the more’ for Dickens.  Does it not give one pause to reflect that the writer of this charming eulogy can only read the half of Dickens, and is half the ideal of his own denunciation.

Dickens’s imagination was diligent from the outset; with him conception was not less deliberate and careful than development; and so much he confesses when he describes himself as ‘in the first stage of a new book, which consists in going round and round the idea, as you see a bird in his cage go about and about his sugar before he touches it.’  ‘I have no means,’ he writes to a person wanting advice, ‘of knowing whether you are patient in the pursuit of this art; but I am inclined to think that you are not, and that you do not discipline yourself enough.  When one is impelled to write this or that, one has still to consider: “How much of this will tell for what I mean?  How much of it is my own wild emotion and superfluous energy—how much remains that is truly belonging to this ideal character and these ideal circumstances?”  It is in the laborious struggle to make this distinction, and in the determination to try for it, that the road to the correction of faults lies.  [Perhaps I may remark, in support of the sincerity with which I write this, that I am an impatient and impulsive person myself, but that it has been for many years the constant effort of my life to practise at my desk what I preach to you.]’  Such golden words could only have come from one enamoured of his art, and holding the utmost endeavour in its behalf of which his heart and mind were capable for a matter of simple duty.  They are a proof that Dickens—in intention at least, and if in intention then surely, the fact of his genius being admitted, to some extent in fact as well—was an artist in the best sense of the term.