Victorian Songs Lyrics of the Affections and Nature 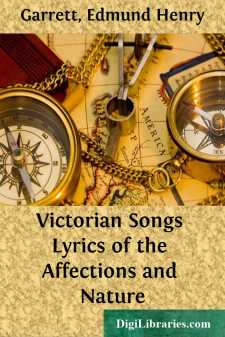 No species of poetry is more ancient than the lyrical, and yet none shows so little sign of having outlived the requirements of human passion. The world may grow tired of epics and of tragedies, but each generation, as it sees the hawthorns blossom and the freshness of girlhood expand, is seized with a pang which nothing but the spasm of verse will relieve. Each youth imagines that spring-tide and love are wonders which he is the first of human beings to appreciate, and he burns to alleviate his emotion in rhyme. Historians exaggerate, perhaps, the function of music in awakening and guiding the exercise of lyrical poetry. The lyric exists, they tell us, as an accompaniment to the lyre; and without the mechanical harmony the spoken song is an artifice. Quite as plausibly might it be avowed that music was but added to verse to concentrate and emphasize its rapture, to add poignancy and volume to its expression. But the truth is that these two arts, though sometimes happily allied, are, and always have been, independent. When verse has been innocent enough to lean on music, we may be likely to find that music also has been of the simplest order, and that the pair of them, like two delicious children, have tottered and swayed together down the flowery meadows of experience. When either poetry or music is adult, the presence of each is a distraction to the other, and each prefers, in the elaborate ages, to stand alone, since the mystery of the one confounds the complexity of the other. Most poets hate music; few musicians comprehend the nature of poetry; and the combination of these arts has probably, in all ages, been contrived, not for the satisfaction of artists, but for the convenience of their public.

This divorce between poetry and music has been more frankly accepted in the present century than ever before, and is nowadays scarcely opposed in serious criticism. If music were a necessary ornament of lyrical verse, the latter would nowadays scarcely exist; but we hear less and less of the poets devotion (save in a purely conventional sense) to the lute and the pipe. What we call the Victorian lyric is absolutely independent of any such aid. It may be that certain songs of Tennyson and Christina Rossetti have been with great popularity “set,” as it is called, “to music.” So far as the latter is in itself successful, it stultifies the former; and we admit at last that the idea of one art aiding another in this combination is absolutely fictitious. The beauty—even the beauty of sound—conveyed by the ear in such lyrics as “Break, break, break,” or “When I am dead, my dearest,” is obscured, is exchanged for another and a rival species of beauty, by the most exquisite musical setting that a composer can invent.

The age which has been the first to accept this condition, then, should be rich in frankly lyrical poetry; and this we find to be the case with the Victorian period. At no time has a greater mass of this species of verse been produced, not even in the combined Elizabethan and Jacobean age. But when we come to consider the quality of this later harvest of song, we observe in it a far less homogeneous character. We can take a piece of verse, and decide at sight that it must be Elizabethan, or of the age of the Pléiade in France, or of a particular period in Italy. Even an ode of our own eighteenth century is hardly to be confounded with a fragment from any other school. The great Georgian age introduced a wide variety into English poetry; and yet we have but to examine the selected jewels strung into so exquisite a carcanet by Mr. Palgrave in his “Golden Treasury” to notice with surprise how close a family likeness exists between the contributions of Shelley, Wordsworth, Keats, and Byron. The distinctions of style, of course, are very great; but the general character of the diction, the imagery, even of the rhythm, is more or less identical. The stamp of the same age is upon them,—they are hall-marked 1820.

It is perhaps too early to decide that this will never be the case with the Victorian lyrics. While we live in an age we see the distinction of its parts, rather than their co-relation. It is said that the Japanese Government once sent over a Commission to report upon the art of Europe; and that, having visited the exhibitions of London, Paris, Florence, and Berlin, the Commissioners confessed that the works of the European painters all looked so exactly alike that it was difficult to distinguish one from another. The Japanese eye, trained in absolutely opposed conventions, could not tell the difference between a Watts and a Fortuny, a Théodore Rousseau and a Henry Moore. So it is quite possible, it is even probable, that future critics may see a close similarity where we see nothing but divergence between the various productions of the Victorian age....