Vera or, The Nihilists 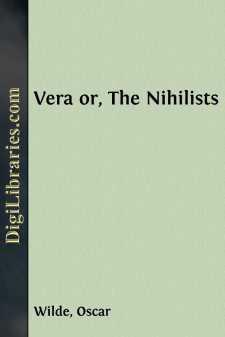 Large door opening on snowy landscape at back of stage.

Peter (warming his hands at a stove). Has Vera not come back yet, Michael?

Mich. No, Father Peter, not yet; 'tis a good three miles to the post office, and she has to milk the cows besides, and that dun one is a rare plaguey creature for a wench to handle.

Peter. Why didn't you go with her, you young fool? she'll never love you unless you are always at her heels; women like to be bothered.

Mich. She says I bother her too much already, Father Peter, and I fear she'll never love me after all.

Peter. Tut, tut, boy, why shouldn't she? you're young and wouldn't be ill-favoured either, had God or thy mother given thee another face. Aren't you one of Prince Maraloffski's gamekeepers; and haven't you got a good grass farm, and the best cow in the village? What more does a girl want?

Peter. Vera, my lad, has got too many ideas; I don't think much of ideas myself; I've got on well enough in life without 'em; why shouldn't my children? There's Dmitri! could have stayed here and kept the inn; many a young lad would have jumped at the offer in these hard times; but he, scatter-brained featherhead of a boy, must needs go off to Moscow to study the law! What does he want knowing about the law! let a man do his duty, say I, and no one will trouble him.

Mich. Ay! but Father Peter, they say a good lawyer can break the law as often as he likes, and no one can say him nay.

Peter. That is about all they are good for; and there he stays, and has not written a line to us for four months now—a good son that, eh?

Mich. Come, come, Father Peter, Dmitri's letters must have gone astray—perhaps the new postman can't read; he looks stupid enough, and Dmitri, why, he was the best fellow in the village. Do you remember how he shot the bear at the barn in the great winter?

Peter. Ay, it was a good shot; I never did a better myself.

Mich. And as for dancing, he tired out three fiddlers Christmas come two years.

Peter. Ay, ay, he was a merry lad. It is the girl that has the seriousness—she goes about as solemn as a priest for days at a time.

Mich. Vera is always thinking of others.