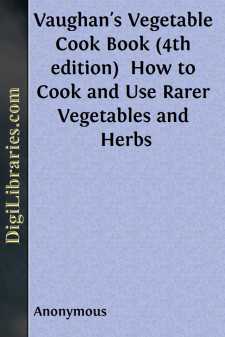 The suggestions and recipes of this cook book have been gathering through the years from sources far and wide. Friends and neighbors have contributed, personal experience has offered its lessons, thrifty housekeepers in home departments of newspapers, reports of lectures, and recipes given to the newspaper world, from teachers in the science of cookery, have all added color or substance to what is herein written. The recipes of the Chicago Record-Herald, rich in material, have been drawn on to a limited extent, credit is given to an owner of a recipe if known, if not it is given to the paper. Compound recipes have been made up from the study of several cook books. "The Cook's Own Book," "The Household," "Practical Housekeeping." French and German recipes have all in some degree been a source of supply to this compilation. We offer the result to you, hoping it will fill a need, and though a wee thing among its grown up sisters, that it will find a place, all its own, in your esteem and good will.

The demand which has made a Third Edition now necessary is the best proof that the volume has found favor, and the ever increasing love of gardening finds its definite expression in this direction as in many other new ones.

A few years ago this delicious vegetable was introduced into this country, though it has been well known and extensively cultivated in China for a long time.

We have grown it at our trial grounds two seasons and have found it a novel, easily grown delicious vegetable. In shape it resembles a giant cos lettuce forming a head some fifteen inches long.

When nearing maturity the outer leaves should be tied up to blanch the heart and when cut two weeks later and the outer leaves removed, appears as a grand oblong solid white head, of crisp tender leaves. We have noticed that late sowing i. e. July gives the largest and best heads. Sown earlier it runs to seed.

Plant in rows 1 ft. apart, with 2 1/2 or 3 ft. between the rows. Water and cultivate freely. For Winter use store same as cabbage, keep from freezing.

Uses. The heads may be cut into convenient sizes and served like lettuce, but is we think, more delicious, when cooked like cabbage and served up in any of the many ways that cabbage is.

An easily grown vegetable, especially valuable when forced during the winter months.

To raise from seed sow in April, lift the roots in Fall and plant out the following Spring in rows 2 ft. apart.

Sea Kale needs well dug, well manured soil and plenty of water. We recommend planting roots (3 year old preferably). Cover the bed with light blanching material, 7 or 8 ins. deep and cut same as Asparagus (Coal ashes is what is usually used for Seakale). It should be ready to cut in 6 or 8 weeks. To get it early, plant 3 roots in hills 4 ft. apart. Place an old bucket or box over the hill and cover all over with fresh stable manure. The heat from the manure will make cutting possible in 2 or 3 weeks; 4 or 6 buckets or boxes may be used and transferred to other hills when first hills are through. (Roots can be procured in the Fall.)

Forcing Inside. Plant 3 to 5 roots in an 8 in. pot and invert a similar pot over it and cover the hole in the top. Place under bench in conservatory or Greenhouse, or in a warm basement where 50 or 60 degrees may be maintained. Water every day. Cutting should be made in from 18 to 21 days, according to heat maintained.

Use. Seakale is considered a great delicacy, the young shoots when cooked are more tender than the youngest Asparagus. They are usually cooked whole and served with white (cream) sauce as Asparagus, or may be chopped up and cooked like celery and served in the same manner. It has a nice buttery flavor of its own, that has to be tasted to be appreciated, a flavor that will take with the household. We do not hesitate to say that if once grown the demand will soon exceed the supply.

Vegetables are at their best in their own season, just as nature develops them, not as man forces them....