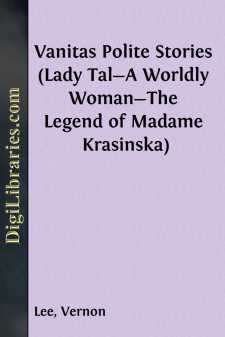 We had a conversation once, walking on your terrace, with the wind-rippled olives above and the quietly nodding cypress tufts below—about such writings as you chose to compare with carved cherry-stones. We disagreed, for it seemed to me that the world needed cherry-stone necklaces as much as anything else; and that the only pity was that most of its inhabitants could not afford such toys, and the rest despised them because they were made of such very cheap material. Still, lest you should wonder at my sending such things to you, I write to declare that my three little tales, whatever they be, are not carved cherry-stones.

For round these sketches of frivolous women, there have gathered some of the least frivolous thoughts, heaven knows, that have ever come into my head; or rather, such thoughts have condensed and taken body in these stories. Indeed, how can one look from outside on the great waste of precious things, delicate discernment, quick feeling and sometimes stoical fortitude, involved in frivolous life, without a sense of sadness and indignation? Or what satisfaction could its portrayal afford, save for the chance that such pictures might mirror some astonished and abashed creature; or show to men and women who toil and think that idleness, and callousness, and much that must seem to them sheer wickedness, is less a fault than a misfortune. For surely it is a misfortune not merely to waste the nobler qualities one has, but to have little inkling of the sense of brotherhood and duty which changes one, from a blind dweller in caves, to an inmate of the real world of storms and sunshine and serene night and exhilarating morning. And, if miracles were still wrought nowadays, as in those times when great sinners (as in Calderon's play) were warned by plucking the hood off their own dead face, there would have been no waste of the supernatural in teaching my Madame Krasinska that poor crazy paupers and herself were after all exchangeable quantities.

Of my three frivolous women, another performed the miracle herself, and abandoned freely the service of the great Goddess Vanitas. While the third … and there is the utter pity of the thing, that frivolous living means not merely waste, but in many cases martyrdom.

That fact, though it had come more than once before my eyes, would perhaps never have been clear to my mind, but for our long talks together about what people are and might be. A certain indignation verging on hatred might have made these stories of mine utterly false and useless, but for the love of all creatures who may suffer with which you lit up the subject. And for this reason the proof sheets of my little book must go first to that old bishop's villa on the lowest Apennine spur, where the chestnuts are dropping, with a sound of rustling silk, on to the sere leaves below, and the autumn rain storms are rushing by, veiling the plain with inky crape, blotting out that distant white shimmer, which, in the sunlight, was Florence a moment ago....