Vanished towers and chimes of Flanders 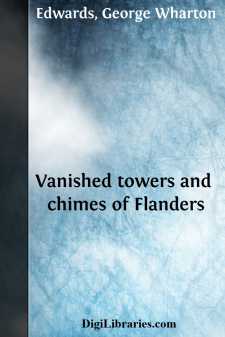 The unhappy Flemish people, who are at present much in the lime-light, because of the invasion and destruction of their once smiling and happy little country, were of a character but little known or understood by the great outside world. The very names of their cities and towns sounded strangely in foreign ears.

Towns named Ypres, Courtrai, Alost, Furnes, Tournai, were in the beginning of the invasion unpronounceable by most people, but little by little they have become familiar through newspaper reports of the barbarities said to have been practised upon the people by the invaders. Books giving the characteristics of these heroic people are eagerly sought. Unhappily these are few, and it would seem that these very inadequate and random notes of mine upon some phases of the lives of these people, particularly those related to architecture, and the music of their renowned chimes of bells, might be useful.

That the Fleming was not of an artistic nature I found during my residence in these towns of Flanders. The great towers and wondrous architectural marvels throughout this smiling green flat landscape appealed to him not at all. He was not interested in either art, music, or literature. He was of an intense practical nature. I am of course speaking of the ordinary or "Bourgeois" class now. Then, too, the class of great landed proprietors was numerically very small indeed, the land generally being parcelled or hired out in small squares or holdings by the peasants themselves. Occasionally the commune owned the land, and sublet portions to the farmers at prices controlled to some extent by the demand. Rarely was a "taking" (so-called) more than five acres or so in extent. Many of the old "Noblesse" are without landed estates, and this, I am informed, was because their lands were forfeited when the French Republic annexed Belgium, and were never restored to them. Thus the whole region of the Flemish littoral was given over to small holdings which were worked on shares by the peasants under general conditions which would be considered intolerable by the Anglo-Saxon. A common and rather depressing sight on the Belgian roads at dawn of day, were the long lines of trudging peasants, men, women and boys hurrying to the fields for the long weary hours of toil lasting often into the dark of night. But we were told they were working for their own profit, were their own masters, and did not grumble. This grinding toil in the fields, as practised here where nothing was wasted, could not of course be a happy or healthful work, nor calculated to elevate the peasant in intelligence, so as a matter of fact the great body of the country people, who were the laborers, were steeped in an extraordinary state of ignorance.

If their education was neglected, they are still sound Catholics, and it may be that it was not thought to be in the interest of the authorities that they should be instructed in more worldly affairs. I am not prepared to argue this question. I only know that while stolid, and unemotional ordinarily, they are intensely patriotic. They became highly excited during the struggle some years ago to have their Flemish tongue preserved and taught in the schools, and I remember the crowds of people thronging the streets of Antwerp, Ghent and Bruges, with bands of music playing, and huge banners flying, bearing in large letters legends such as "Flanders for the Flemings." "Hail to the Flemish Lion" and "Flanders to the Death." All this was when the struggle between the two parties was going on....