Van Bibber and Others 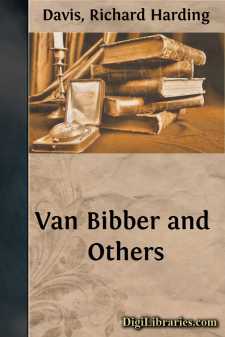 It was at the end of the first act of the first night of "The Sultana," and every member of the Lester Comic Opera Company, from Lester himself down to the wardrobe woman's son, who would have had to work if his mother lost her place, was sick with anxiety.

There is perhaps only one other place as feverish as it is behind the scenes on the first night of a comic opera, and that is a newspaper office on the last night of a Presidential campaign, when the returns are being flashed on the canvas outside, and the mob is howling, and the editor-in-chief is expecting to go to the Court of St. James if the election comes his way, and the office-boy is betting his wages that it won't.

Such nights as these try men's souls; but Van Bibber passed the stage-door man with as calmly polite a nod as though the piece had been running a hundred nights, and the manager was thinking up souvenirs for the one hundred and fiftieth, and the prima donna had, as usual, began to hint for a new set of costumes. The stage-door keeper hesitated and was lost, and Van Bibber stepped into the unsuppressed excitement of the place with a pleased sniff at the familiar smell of paint and burning gas, and the dusty odor that came from the scene-lofts above.

For a moment he hesitated in the cross-lights and confusion about him, failing to recognize in their new costumes his old acquaintances of the company; but he saw Kripps, the stage-manager, in the centre of the stage, perspiring and in his shirt-sleeves as always, wildly waving an arm to some one in the flies, and beckoning with the other to the gas-man in the front entrance. The stage hands were striking the scene for the first act, and fighting with the set for the second, and dragging out a canvas floor of tessellated marble, and running a throne and a practical pair of steps over it, and aiming the high quaking walls of a palace and abuse at whoever came in their way.

"Now then, Van Bibber," shouted Kripps, with a wild glance of recognition, as the white-and-black figure came towards him, "you know you're the only man in New York who gets behind here to-night. But you can't stay. Lower it, lower it, can't you?" This to the man in the flies. "Any other night goes, but not this night. I can't have it. I—Where is the backing for the centre entrance? Didn't I tell you men—"

Van Bibber dodged two stage hands who were steering a scene at him, stepped over the carpet as it unrolled, and brushed through a group of anxious, whispering chorus people into the quiet of the star's dressing-room.

The star saw him in the long mirror before which he sat, while his dresser tugged at his boots, and threw up his hands desperately.

"Well," he cried, in mock resignation, "are we in it or are we not? Are they in their seats still or have they fled?"

"How are you, John?" said Van Bibber to the dresser. Then he dropped into a big arm-chair in the corner, and got up again with a protesting sigh to light his cigar between the wires around the gas-burner....