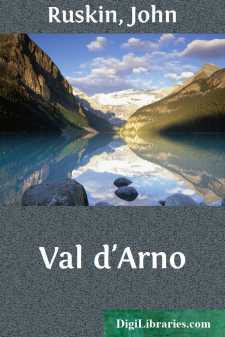 LECTURE I. NICHOLAS THE PISAN.

1. On this day, of this month, the 20th of October, six hundred and twenty-three years ago, the merchants and tradesmen of Florence met before the church of Santa Croce; marched through the city to the palace of their Podesta; deposed their Podesta; set over themselves, in his place, a knight belonging to an inferior city; called him "Captain of the People;" appointed under him a Signory of twelve Ancients chosen from among themselves; hung a bell for him on the tower of the Lion, that he might ring it at need, and gave him the flag of Florence to bear, half white, and half red.

The first blow struck upon the bell in that tower of the Lion began the tolling for the passing away of the feudal system, and began the joy- peal, or carillon, for whatever deserves joy, in that of our modern liberties, whether of action or of trade.

2. Within the space of our Oxford term from that day, namely, on the 13th of December in the same year, 1250, died, at Ferentino, in Apulia, the second Frederick, Emperor of Germany; the second also of the two great lights which in his lifetime, according to Dante's astronomy, ruled the world,—whose light being quenched, "the land which was once the residence of courtesy and valour, became the haunt of all men who are ashamed to be near the good, or to speak to them."

3. The "Paese che Adice e Po riga" is of course Lombardy; and might have been enough distinguished by the name of its principal river. But Dante has an especial reason for naming the Adige. It is always by the valley of the Adige that the power of the German Caesars descends on Italy; and that battlemented bridge, which doubtless many of you remember, thrown over the Adige at Verona, was so built that the German riders might have secure and constant access to the city. In which city they had their first stronghold in Italy, aided therein by the great family of the Montecchi, Montacutes, Mont-aigu-s, or Montagues; lords, so called, of the mountain peaks; in feud with the family of the Cappelletti,—hatted, or, more properly, scarlet-hatted, persons. And this accident of nomenclature, assisted by your present familiar knowledge of the real contests of the sharp mountains with the flat caps, or petasoi, of cloud, (locally giving Mont Pilate its title, "Pileatus,") may in many points curiously illustrate for you that contest of Frederick the Second with Innocent the Fourth, which in the good of it and the evil alike, represents to all time the war of the solid, rational, and earthly authority of the King, and State, with the more or less spectral, hooded, imaginative, and nubiform authority of the Pope, and Church.

4. It will be desirable also that you clearly learn the material relations, governing spiritual ones,—as of the Alps to their clouds, so of the plains to their rivers....