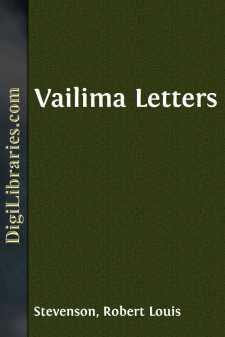 MY DEAR COLVIN, - As I rode down last night about six, I saw a sight I must try to tell you of. In front of me, right over the top of the forest into which I was descending was a vast cloud. The front of it accurately represented the somewhat rugged, long-nosed, and beetle-browed profile of a man, crowned by a huge Kalmuck cap; the flesh part was of a heavenly pink, the cap, the moustache, the eyebrows were of a bluish gray; to see this with its childish exactitude of design and colour, and hugeness of scale - it covered at least 25 degrees - held me spellbound. As I continued to gaze, the expression began to change; he had the exact air of closing one eye, dropping his jaw, and drawing down his nose; had the thing not been so imposing, I could have smiled; and then almost in a moment, a shoulder of leaden-coloured bank drove in front and blotted it. My attention spread to the rest of the cloud, and it was a thing to worship. It rose from the horizon, and its top was within thirty degrees of the zenith; the lower parts were like a glacier in shadow, varying from dark indigo to a clouded white in exquisite gradations. The sky behind, so far as I could see, was all of a blue already enriched and darkened by the night, for the hill had what lingered of the sunset. But the top of my Titanic cloud flamed in broad sunlight, with the most excellent softness and brightness of fire and jewels, enlightening all the world. It must have been far higher than Mount Everest, and its glory, as I gazed up at it out of the night, was beyond wonder. Close by rode the little crescent moon; and right over its western horn, a great planet of about equal lustre with itself. The dark woods below were shrill with that noisy business of the birds' evening worship. When I returned, after eight, the moon was near down; she seemed little brighter than before, but now that the cloud no longer played its part of a nocturnal sun, we could see that sight, so rare with us at home that it was counted a portent, so customary in the tropics, of the dark sphere with its little gilt band upon the belly. The planet had been setting faster, and was now below the crescent. They were still of an equal brightness.

I could not resist trying to reproduce this in words, as a specimen of these incredibly beautiful and imposing meteors of the tropic sky that make so much of my pleasure here; though a ship's deck is the place to enjoy them. O what AWFUL scenery, from a ship's deck, in the tropics! People talk about the Alps, but the clouds of the trade wind are alone for sublimity.

Now to try and tell you what has been happening. The state of these islands, and of Mataafa and Laupepa (Malietoa's AMBO) had been much on my mind. I went to the priests and sent a message to Mataafa, at a time when it was supposed he was about to act. He did not act, delaying in true native style, and I determined I should go to visit him. I have been very good not to go sooner; to live within a few miles of a rebel camp, to be a novelist, to have all my family forcing me to go, and to refrain all these months, counts for virtue. But hearing that several people had gone and the government done nothing to punish them, and having an errand there which was enough to justify myself in my own eyes, I half determined to go, and spoke of it with the half-caste priest. And here (confound it) up came Laupepa and his guards to call on me; we kept him to lunch, and the old gentleman was very good and amiable. He asked me why I had not been to see him? I reminded him a law had been made, and told him I was not a small boy to go and ask leave of the consuls, and perhaps be refused. He told me to pay no attention to the law but come when I would, and begged me to name a day to lunch. The next day (I think it was) early in the morning, a man appeared; he had metal buttons like a policeman - but he was none of our Apia force; he was a rebel policeman, and had been all night coming round inland through the forest from Malie. He brought a letter addressed

(So as not to compromise me). I can read Samoan now, though not speak it. It was to ask me for last Wednesday. My difficulty was great; I had no man here who was fit, or who would have cared to write for me; and I had to postpone the visit. So I gave up half-a-day with a groan, went down to the priests, arranged for Monday week to go to Malie, and named Thursday as my day to lunch with Laupepa. I was sharply ill on Wednesday, mail day. But on Thursday I had to trail down and go through the dreary business of a feast, in the King's wretched shanty, full in view of the President's fine new house; it made my heart burn.

This gave me my chance to arrange a private interview with the King, and I decided to ask Mr. Whitmee, one of our missionaries, to be my interpreter. On Friday, being too much exhausted to go down, I begged him to come up. He did, I told him the heads of what I meant to say; and he not only consented, but said, if we got on well with the King, he would even proceed with me to Malie. Yesterday, in consequence, I rode down to W.'s house by eight in the morning; waited till ten; received a message that the King was stopped by a meeting with the President and FAIPULE; made another engagement for seven at night; came up; went down; waited till eight, and came away again, BREDOUILLE, and a dead body....