Utopia of Usurers and Other Essays 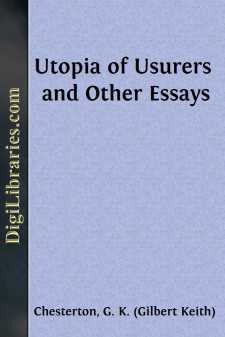 A SONG OF SWORDS

"A drove of cattle came into a village called Swords; and was stopped by the rioters."—Daily Paper.

Light in the East and light in the West,And light on the cruel lords,On the souls that suddenly all men knew,And the green flag flew and the red flag flew,And many a wheel of the world stopped, too,When the cattle were stopped at Swords.

Be they sinners or less than saintsThat smite in the street for rage,We know where the shame shines bright; we knowYou that they smite at, you their foe,Lords of the lawless wage and low,This is your lawful wage.

You pinched a child to a torture priceThat you dared not name in words;So black a jest was the silver bitThat your own speech shook for the shame of it,And the coward was plain as a cow they hitWhen the cattle have strayed at Swords.

The wheel of the torrent of wives went roundTo break men's brotherhood;You gave the good Irish blood to greaseThe clubs of your country's enemies;you saw the brave man beat to the knees:And you saw that it was good.

The rope of the rich is long and long—The longest of hangmen's cords;But the kings and crowds are holding their breath,In a giant shadow o'er all beneathWhere God stands holding the scales of DeathBetween the cattle and Swords.

Haply the lords that hire and lendThe lowest of all men's lords,Who sell their kind like kine at a fair,Will find no head of their cattle there;But faces of men where cattle were:Faces of men—and Swords.

I. Art and Advertisement

I propose, subject to the patience of the reader, to devote two or three articles to prophecy. Like all healthy-minded prophets, sacred and profane, I can only prophesy when I am in a rage and think things look ugly for everybody. And like all healthy-minded prophets, I prophesy in the hope that my prophecy may not come true. For the prediction made by the true soothsayer is like the warning given by a good doctor. And the doctor has really triumphed when the patient he condemned to death has revived to life. The threat is justified at the very moment when it is falsified. Now I have said again and again (and I shall continue to say again and again on all the most inappropriate occasions) that we must hit Capitalism, and hit it hard, for the plain and definite reason that it is growing stronger. Most of the excuses which serve the capitalists as masks are, of course, the excuses of hypocrites. They lie when they claim philanthropy; they no more feel any particular love of men than Albu felt an affection for Chinamen. They lie when they say they have reached their position through their own organising ability. They generally have to pay men to organise the mine, exactly as they pay men to go down it. They often lie about the present wealth, as they generally lie about their past poverty....