Up the Hill and Over 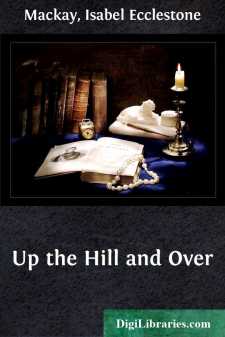 The cheery singing ended abruptly with the collapse of the singer upon a particularly inviting slope of grass. He was very dusty. He was very hot. The way from Wimbleton to Wombleton seemed suddenly extraordinarily long and tiresome. The slope was green and cool. Just below it slept a cool, green pool, deep, deliciousвЂ”a swimming pool such as dreams are made of.

If there were no one aboutвЂ”but there was some one about. Further down the slope, and stretched at full length upon it, lay a small boy. Near the small boy lay a packet of school books.

The wayfarer's lips relaxed in an appreciative smile.

"Little boy," he called, somewhat hoarsely on account of the dust in his throat, "little boy, can you tell me how far it is from here to Wimbleton?"

Apparently the little boy was deaf.

The questioner raised his voice, "or if you can oblige me with the exact distance to Wombleton," he went on earnestly, "that will do quite as well."

No answer, civil or otherwise, from the youth by the pool. Only a convulsive wiggle intended to cover the undefended position of the school books.

The traveller's smile broadened but he made no further effort toward sociability. Neither did he go away. To the dismayed eyes, watching through the cover of some long grass, he was clearly a person devoid of all fine feeling. Or perhaps he had never been taught not to stay where he wasn't wanted. Mebby he didn't even know that he wasn't wanted.

In order to remove all doubt as to the latter point, the small boy's head shot up suddenly out of the covering grass.

"What d'ye want?" he asked forbiddingly.

"Little boy," said the stranger, "I thank you. I want for nothing."

The head collapsed, but quickly came up again.

"I was going, little boy, but I have stopped."

This was so true that the small boy sat up and scowled.

"I judge," went on the other, "that I am now midway between Arden, otherwise, Wimbleton, and Arcady, sometime known as Wombleton. The question is, which way and how? A simple sum in arithmetic willвЂ”little boy, do not frown like that! The wind may change. Smile nicely, and I'll tell you something."

Urged by necessity, the badgered one attempted to look pleasant.

"That's better! Now, my cheerful child, what I really want to know is 'how many miles to Babylon?'"

A reluctant grin showed that the small boy's early education had not been utterly neglected. "Aw, what yeh givin' us?" he protested sheepishly, "if it's Coombe you're lookin' for, it's 'bout a mile and a half down the next holler."

"Holler?" the stranger's tone was faintly questioning. "Oh, I see. You mean 'hollow,' which being interpreted means 'valley,' which means, I fear, another hill. Little boy, do you want to carry a knapsack?"