Up in the Clouds Balloon Voyages 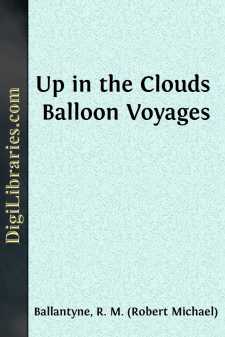 It is man’s nature to soar intellectually, and it seems to have been his ambition from earliest ages to soar physically.

Every one in health knows, or at some period of life must have known, that upward bounding of the spirit which induces a longing for the possession of wings, that the material body might be wafted upwards into those blue realms of light, which are so attractive to the eye and imagination of poor creeping man that he has appropriately styled them the heavens.

To fly with the body as well as with the mind, is a wish so universal that the benignant Creator Himself seems to recognise it in that most attractive passage in Holy Writ, wherein it is said that believers shall “mount up with wings as eagles, they shall run and not be weary, they shall walk and not faint.”

Of course man has not reached the middle of the nineteenth century without making numerous attempts to fly bodily up to the skies. Fortunately, however, such ambitious efforts have seldom been made except by the intellectually enthusiastic. Prosaic man, except in the case of the Tower of Babel, has remained content to gaze upwards with longing desire, and only a few of our species in the course of centuries have possessed temerity enough to make the deliberate effort to ride upon the wings of the wind.

Naturally, the first attempts were, like most beginnings, simple and imitative. The birds flew with wings, therefore man put on artificial wings and essayed to fly like the birds. It was not until many grievous disappointments and sad accidents had befallen him, that he unwillingly gave up wings in despair, and set to work to accomplish his ends by more cumbrous and complex machinery.

Very early in the world’s history, however, “flying machines” were made, some of which were doubtless intended by their honest inventors to carry men through the air, while others were mere shams, made by designing men, wherewith to impose upon the ignorant for wicked ends of their own; and some of these last were, no doubt, believed to be capable of the feats attributed to them.

The credulity of the ancients is not to be wondered at when we reflect on the magical illusions which science enables us to produce at the present day—illusions so vivid and startling that it requires the most elaborate explanations by adepts and philosophers to convince some among their audiences that what they think they see is absolutely not real! No wonder that the men of old had firm faith in the existence of all kinds of flying machines and creatures.

They believed that fiery dragons were created by infernal machination, which, although not what we may call natural creatures, were nevertheless supposed to rush impetuous through the sky, vomiting flames and scattering the seeds of pestilence far and wide....