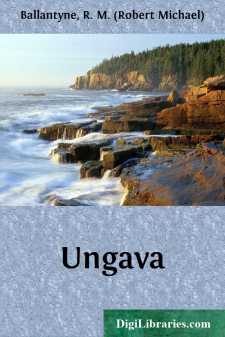 The following story is intended to illustrate one of the many phases of the fur-trader’s life in those wild regions of North America which surround Hudson’s Bay.

Most of its major incidents are facts—fiction being employed chiefly for the purpose of weaving these facts into a readable form.

If this volume should chance to fall into the hands of any of those who acted a part in the first settlement of Ungava, we trust that they will forgive the liberty that has been taken with their persons and adventures, remembering that transpositions, modifications, and transformations are necessary in constructing a tale out of the “raw material.”

We take this opportunity of expressing to the Leader of the adventurous band our grateful acknowledgements for his kindness in placing at our disposal the groundwork on which this story has been reared.

Chapter One. The forest, and the leaders of the folorn-hope—A good shot—A consultation—An ice-floe, and a narrow chance of escape in a small way.

“Hallo! where are you!” shouted a voice that rang through the glades of the forest like the blast of a silver trumpet, testifying to lungs of leather and a throat of brass.

The ringing tones died away, and naught was heard save the rustling of the leafy canopy overhead, as the young man, whose shout had thus rudely disturbed the surrounding echoes, leaned on the muzzle of a long rifle, and stood motionless as a statue, his right foot resting on the trunk of a fallen tree, and his head bent slightly to one side, as if listening for a reply. But no reply came. A squirrel ran down the trunk of a neighbouring pine, and paused, with tail and ears erect, and its little black eyes glittering as if with surprise at the temerity of him who so recklessly dared to intrude upon and desecrate with his powerful voice the deep solitudes of the wilderness. They stood so long thus that it seemed as though the little animal and the man had been petrified by the unwonted sound. If so, the spell was quickly broken. The loud report of a fowling-piece was heard at a short distance. The squirrel incontinently disappeared from the spot on which it stood, and almost instantaneously reappeared on the topmost branch of a high tree; while the young man gave a smile of satisfaction, threw the rifle over his shoulder, and, turning round, strode rapidly away in the direction whence the shot proceeded.

A few minutes’ walk brought him to the banks of a little brook, by the side of which, on the projecting root of a tree, sat a man, with a dead goose at his feet and a fowling-piece by his side. He was dressed in the garb of a hunter; and, from the number of gray hairs that shone like threads of silver among the black curls on his temples, he was evidently past the meridian of life—although, from the upright bearing of his tall, muscular frame, and the quick glance of his fearless black eye, it was equally evident that the vigour of his youth was not yet abated.

“Why, Stanley,” exclaimed the young man as he approached, “I’ve been shouting till my throat is cracked, for at least half an hour....