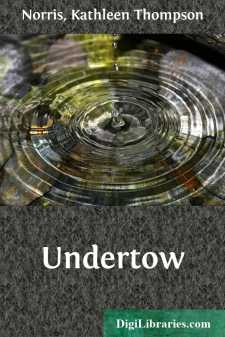 The marriage of Albert Bradley and Anne Polk Barrett was as close as anything comes, in these prosaic days, to a high adventure. Nancy's Uncle Thomas, a quiet, gentle old Southerner who wore tan linen suits when he came to New York, which was not often, and Bert's mother, a tiny Boston woman who had lived in a diminutive Brookline apartment since her three sons had struck out into the world for themselves, respectively assured the young persons that they were taking a grave chance. However different their viewpoint of life, old Mrs. Bradley and old Mr. Polk could agree heartily in that.

Of course there was much to commend the union. Nancy was beautiful, she came of gentlefolk, and she liked to assert that she was practical, she "had been a workin' woman for yeahs." This statement had reference to a comfortable and informal position she held with a private association for the relief of the poor. Nancy was paid fifteen dollars a week, seven of which she in turn paid to the pretty young widow, an old family friend only a few years older than herself, with whom she boarded. Mrs. Terhune was rich, in a modest way, and frequently refused the money entirely. But she took it often enough to make the blooming Nancy feel quite self-supporting, and as Nancy duly reported at the sunshiny office of the Southern Ladies' Helping Hand every morning, or almost every morning, the girl had some reason to feel that she had solved her financial and domestic problem.

Bert was handsome, too, and his mother knew everybody who was any body in Boston. If Nancy's grandfather Polk had been Chief Justice of the Supreme Court of Maryland, why, Bert was the seventh of his name in direct descent, and it was in Bert's great-great- grandfather's home that several prominent citizens of Boston had assumed feathers and warpaint for a celebrated tea-party a great many years ago.

More than that, Bert was at a sensible age for matrimony, twenty- five, and Nancy, like all southern girls, had ripened early, and at twenty-two had several years of dancing and flirting behind her. There was nothing impulsive about the affair. The two had trotted about their adopted city for perhaps two years before Bert brought Nancy the enormous diamond that his mother had given him years ago for just this wonderful time. Circumstances had helped them to know each other well. Nancy knew the sort of play that made Bert stutter with enthusiasm as they walked home, and Bert knew that Nancy made adorable little faces when she tried on hats, and that her salary was fifteen dollars a week. At this time, and for some years later, Bert was only one of several renting agents employed by the firm of Pearsall and Pearsall, City Real Estate. He moved his office from one new office-building downtown to another, sometimes warmed by clanking new radiators, sometimes carrying a gasoline stove with him into the region of new plaster and paint. His name was not important enough to be included in the list of tenants in the vestibule, he was merely "Renting Office, Tenth Floor." And Nancy knew that when he had been a few months longer with Pearsall and Pearsall, they would pay him exactly thirteen hundred dollars a year....