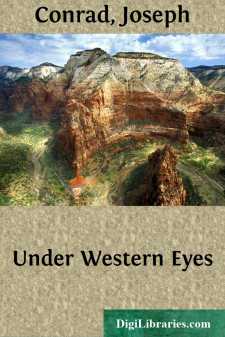 To begin with I wish to disclaim the possession of those high gifts of imagination and expression which would have enabled my pen to create for the reader the personality of the man who called himself, after the Russian custom, Cyril son of Isidor—Kirylo Sidorovitch—Razumov.

If I have ever had these gifts in any sort of living form they have been smothered out of existence a long time ago under a wilderness of words. Words, as is well known, are the great foes of reality. I have been for many years a teacher of languages. It is an occupation which at length becomes fatal to whatever share of imagination, observation, and insight an ordinary person may be heir to. To a teacher of languages there comes a time when the world is but a place of many words and man appears a mere talking animal not much more wonderful than a parrot.

This being so, I could not have observed Mr. Razumov or guessed at his reality by the force of insight, much less have imagined him as he was. Even to invent the mere bald facts of his life would have been utterly beyond my powers. But I think that without this declaration the readers of these pages will be able to detect in the story the marks of documentary evidence. And that is perfectly correct. It is based on a document; all I have brought to it is my knowledge of the Russian language, which is sufficient for what is attempted here. The document, of course, is something in the nature of a journal, a diary, yet not exactly that in its actual form. For instance, most of it was not written up from day to day, though all the entries are dated. Some of these entries cover months of time and extend over dozens of pages. All the earlier part is a retrospect, in a narrative form, relating to an event which took place about a year before.

I must mention that I have lived for a long time in Geneva. A whole quarter of that town, on account of many Russians residing there, is called La Petite Russie—Little Russia. I had a rather extensive connexion in Little Russia at that time. Yet I confess that I have no comprehension of the Russian character. The illogicality of their attitude, the arbitrariness of their conclusions, the frequency of the exceptional, should present no difficulty to a student of many grammars; but there must be something else in the way, some special human trait—one of those subtle differences that are beyond the ken of mere professors. What must remain striking to a teacher of languages is the Russians' extraordinary love of words. They gather them up; they cherish them, but they don't hoard them in their breasts; on the contrary, they are always ready to pour them out by the hour or by the night with an enthusiasm, a sweeping abundance, with such an aptness of application sometimes that, as in the case of very accomplished parrots, one can't defend oneself from the suspicion that they really understand what they say. There is a generosity in their ardour of speech which removes it as far as possible from common loquacity; and it is ever too disconnected to be classed as eloquence.......