Under the Southern Cross or Travels in Australia, Tasmania, New Zealand, Samoa, and Other Pacific Islands 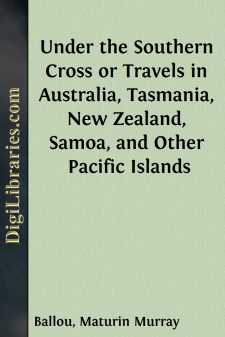 When the author resolved upon a journey to the Antipodes he was in London, just returned from Norway, Sweden, and Russia, and contemplated reaching the far-away countries of Australia and New Zealand by going due east through the Mediterranean, the Suez Canal, the Red Sea, and then crossing the Indian Ocean. But this is not the nearest route to Oceania. The English monthly mail for that part of the world is regularly forwarded from Liverpool to Boston or New York, thence across the continent of America, and by steamboat from San Francisco. These mail steamers touch at the Sandwich Islands, after which the course lies southwest into the island-dotted latitudes of the widespread South Pacific. Auckland, in New Zealand, is reached by this route in thirty-seven days from London; and Sydney, in Australia, five days later,—the two great English colonies being separated by over a thousand miles of unbroken ocean. The latter route was adopted by the writer of these pages as being both more comfortable and more expeditious. Having already experienced the sirocco-like heat of the Red Sea throughout its whole length, from Adin to Suez, the prospect of a second journey in that exhausting region was anything but attractive. The Atlantic Ocean was therefore crossed to the westward, and a fair start made from much nearer home; namely, by the American Central Pacific route.

The journey by rail across our own continent was easily accomplished in one week of day-and-night travel, covering a distance of thirty-four hundred miles from Boston to San Francisco. Comfortable sleeping-cars obviate the necessity of stopping by the way for bodily rest, provided the traveller be physically strong and in good health. On a portion of the road one not only retires at his usual hour, but he also breakfasts, dines, and enjoys nearly all the domestic conveniences in the train, while it is moving at a rate varying from thirty-five to forty-five miles per hour, in such well-adjusted cars as hardly to realize that he is all the time being rapidly and surely forwarded to his destination.

The pleasing variety of scenery presented to the eyes of the watchful traveller from the car windows is extremely interesting and peculiarly American, embracing peaceful, widespread, fertile fields, valleys of exquisite verdure, foaming torrents and mountain gorges, together with Alpine ranges worthy of Switzerland. Now the route skirts the largest lakes on the face of the globe, navigated by mammoth steam ships; now follows the silvery course of some broad river, or crosses a great commercial water-way, hundreds of feet above its surface, by iron bridges skilfully hung in air. For scores of miles the road may run parallel with some busy canal crowded with heavily-laden barges, slowly making their way to market. Besides winding through mountain gorges, plains, parks, and primeval forests, one passes en route through grand and populous cities numbering half a million and more of people each, as well as through pleasant towns, thrifty villages, pioneer hamlets, and Indian reservations, where the plains are as far-reaching as the open sea, the blue of the sky overhead and the yellow buffalo-grass which carpets the earth forming the only blending colors,—until by and by a distant glimpse of the waters of the Pacific signifies that the land-journey draws near its close, and soon after the young but wonderful giant city of the West, San Francisco, is reached.

Five years had elapsed since we last visited this thriving metropolis, during which brief period whole streets of substantial houses have been erected in what was formerly a suburb of the town, and many noble architectural structures have been reared upon the long avenues previously established. In population forty thousand inhabitants have in that space of time been added to its aggregate numbers, while it is to-day growing in wealth, numbers, and political importance faster than ever before. What a panorama of living interest was afforded by its streets, alleys, and broad boulevards! How impressive to watch its cosmopolitan life, to note the exaggerated love of pleasure exhibited on all hands, the devotion of each active member of the community to money-making, the artificial manners and customs so widely prevailing, the iniquitous pursuits of the desperate and dangerous classes, and the ripe aptitude of their too willing victims!...