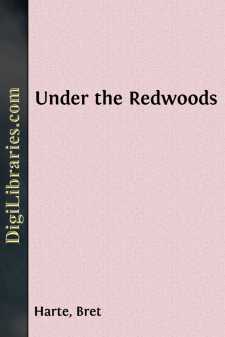 As night crept up from the valley that stormy afternoon, Sawyer's Ledge was at first quite blotted out by wind and rain, but presently reappeared in little nebulous star-like points along the mountain side, as the straggling cabins of the settlement were one by one lit up by the miners returning from tunnel and claim. These stars were of varying brilliancy that evening, two notably so—one that eventually resolved itself into a many-candled illumination of a cabin of evident festivity; the other into a glimmering taper in the window of a silent one. They might have represented the extreme mutations of fortune in the settlement that night: the celebration of a strike by Robert Falloner, a lucky miner; and the sick-bed of Dick Lasham, an unlucky one.

The latter was, however, not quite alone. He was ministered to by Daddy Folsom, a weak but emotional and aggressively hopeful neighbor, who was sitting beside the wooden bunk whereon the invalid lay. Yet there was something perfunctory in his attitude: his eyes were continually straying to the window, whence the illuminated Falloner festivities could be seen between the trees, and his ears were more intent on the songs and laughter that came faintly from the distance than on the feverish breathing and unintelligible moans of the sufferer.

Nevertheless he looked troubled equally by the condition of his charge and by his own enforced absence from the revels. A more impatient moan from the sick man, however, brought a change to his abstracted face, and he turned to him with an exaggerated expression of sympathy.

"In course! Lordy! I know jest what those pains are: kinder ez ef you was havin' a tooth pulled that had roots branchin' all over ye! My! I've jest had 'em so bad I couldn't keep from yellin'! That's hot rheumatics! Yes, sir, I oughter know! And" (confidentially) "the sing'ler thing about 'em is that they get worse jest as they're going off—sorter wringin' yer hand and punchin' ye in the back to say 'Good-by.' There!" he continued, as the man sank exhaustedly back on his rude pillow of flour-sacks. "There! didn't I tell ye? Ye'll be all right in a minit, and ez chipper ez a jay bird in the mornin'. Oh, don't tell me about rheumatics—I've bin thar! On'y mine was the cold kind—that hangs on longest—yours is the hot, that burns itself up in no time!"

If the flushed face and bright eyes of Lasham were not enough to corroborate this symptom of high fever, the quick, wandering laugh he gave would have indicated the point of delirium. But the too optimistic Daddy Folsom referred this act to improvement, and went on cheerfully: "Yes, sir, you're better now, and"—here he assumed an air of cautious deliberation, extravagant, as all his assumptions were—"I ain't sayin' that—ef—you—was—to—rise—up" (very slowly) "and heave a blanket or two over your shoulders—jest by way o' caution, you know—and leanin' on me, kinder meander over to Bob Falloner's cabin and the boys, it wouldn't do you a heap o' good....