Under the Country Sky 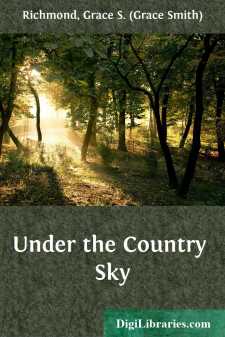 She did not want to hate the girls; indeed, since she loved them all, it would go particularly hard with her if she had to hate them; love turned to hate is such a virulent product! But, certainly, she had never found it so hard to be patient with them.

They were all five her college classmates, of only last year's class, and it was dear and kind of them to drive out here into the country to see her, coming in Phyllis Porter's great family limousine, the prettiest, jolliest little "crowd" imaginable. They had been thoughtful enough to warn her that they were coming, too, so that she could set the old manse living-room in its pleasantest order, build a crackling apple-wood fire in the fireplace, and get out her best thin china and silver with which to serve afternoon tea—she made it chocolate, with vivid recollection of their tastes; and added deliciously substantial though delicate sandwiches, with plenty of the fruitiest and nuttiest kinds of little cakes. She had donned the one real afternoon frock she possessed, a clever make-over out of nothing in particular. Altogether, when she greeted her guests, as they ran, fur-clad and silk-stockinged after the manner of their kind, into her welcoming arms, she had seemed to them absolutely the old Georgiana.

They had brought her a wonderful box of red roses—and Phyllis had caught her kissing one of the great, silky buds as she put it with the rest in a bowl. "I don't believe she's seen a hothouse rose since she left college," thought Phyllis, with a stab of pity at her tender heart. But for the first hour of their stay Georgiana had been her gay and brilliant self, flinging quips and jests broadcast, asking impertinent questions, making saucy comments, quite as of old. It was only when Dot Manning, toward the end of the visit, began a sober tale of the misfortunes which had come thronging into the life of one of their classmates, that Georgiana's face, sobering into sympathetic gravity, betrayed to her companions a curious change which had come upon it since they saw it last.

Meanwhile, in answer to her questioning, they had told her all about themselves. Phyllis Porter and Celia Winters were having a glorious season in society. Theo Crossman was deep in settlement work—"crazy over it" was, of course, the phrase. Dot Manning was going abroad next week for a year of travel in all sorts of beguiling, out-of-the-way places. As for Madge Sylvester, who was getting ready to be married after Easter, the first of the class, she sat mostly in a dreamy, smiling silence, looking into the fire while the others talked.

No, Georgiana did not want to hate the girls, but before their stay was over she found herself coming dangerously near it—temporarily, at least. They were dears, of course, but they were so content with themselves and so pitiful of her. Not, of course, that they meant to let her see this, but it showed in spite of them. They wanted to know what she did with herself, whether there were any young people, and any good times going on—Georgiana led them to the window, just at this point, and pointed out to them a vigorous young man striding by in ulster and soft hat, who looked up and waved as he passed, showing one of those fine and manly young faces, glowing with health and hopefulness, which always challenge interest from girlhood....