Uncle Silas A Tale of Bartram-Haugh 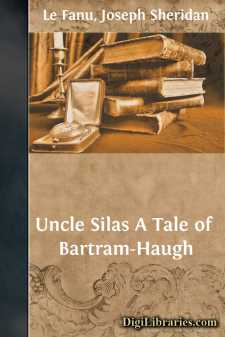 The writer of this Tale ventures, in his own person, to address a very few words, chiefly of explanation, to his readers. A leading situation in this 'Story of Bartram-Haugh' is repeated, with a slight variation, from a short magazine tale of some fifteen pages written by him, and published long ago in a periodical under the title of 'A Passage in the Secret History of an Irish Countess,' and afterwards, still anonymously, in a small volume under an altered title. It is very unlikely that any of his readers should have encountered, and still more so that they should remember, this trifle. The bare possibility, however, he has ventured to anticipate by this brief explanation, lest he should be charged with plagiarism—always a disrespect to a reader.

May he be permitted a few words also of remonstrance against the promiscuous application of the term 'sensation' to that large school of fiction which transgresses no one of those canons of construction and morality which, in producing the unapproachable 'Waverley Novels,' their great author imposed upon himself? No one, it is assumed, would describe Sir Walter Scott's romances as 'sensation novels;' yet in that marvellous series there is not a single tale in which death, crime, and, in some form, mystery, have not a place.

Passing by those grand romances of 'Ivanhoe,' 'Old Mortality,' and 'Kenilworth,' with their terrible intricacies of crime and bloodshed, constructed with so fine a mastery of the art of exciting suspense and horror, let the reader pick out those two exceptional novels in the series which profess to paint contemporary manners and the scenes of common life; and remembering in the 'Antiquary' the vision in the tapestried chamber, the duel, the horrible secret, and the death of old Elspeth, the drowned fisherman, and above all the tremendous situation of the tide-bound party under the cliffs; and in 'St. Ronan's Well,' the long-drawn mystery, the suspicion of insanity, and the catastrophe of suicide;—determine whether an epithet which it would be a profanation to apply to the structure of any, even the most exciting of Sir Walter Scott's stories, is fairly applicable to tales which, though illimitably inferior in execution, yet observe the same limitations of incident, and the same moral aims.

The author trusts that the Press, to whose masterly criticism and generous encouragement he and other humble labourers in the art owe so much, will insist upon the limitation of that degrading term to the peculiar type of fiction which it was originally intended to indicate, and prevent, as they may, its being made to include the legitimate school of tragic English romance, which has been ennobled, and in great measure founded, by the genius of Sir Walter Scott.