Uncle Bernac A Memory of the Empire 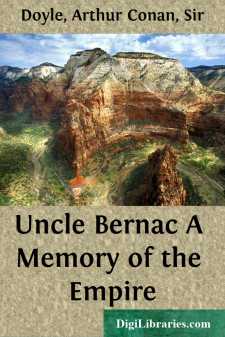 CHAPTER I THE COAST OF FRANCE

I dare say that I had already read my uncle's letter a hundred times, and I am sure that I knew it by heart. None the less I took it out of my pocket, and, sitting on the side of the lugger, I went over it again with as much attention as if it were for the first time. It was written in a prim, angular hand, such as one might expect from a man who had begun life as a village attorney, and it was addressed to Louis de Laval, to the care of William Hargreaves, of the Green Man in Ashford, Kent. The landlord had many a hogshead of untaxed French brandy from the Normandy coast, and the letter had found its way by the same hands.

'My dear nephew Louis,' said the letter, 'now that your father is dead, and that you are alone in the world, I am sure that you will not wish to carry on the feud which has existed between the two halves of the family. At the time of the troubles your father was drawn towards the side of the King, and I towards that of the people, and it ended, as you know, by his having to fly from the country, and by my becoming the possessor of the estates of Grosbois. No doubt it is very hard that you should find yourself in a different position to your ancestors, but I am sure that you would rather that the land should be held by a Bernac than by a stranger. From the brother of your mother you will at least always meet with sympathy and consideration.

'And now I have some advice for you. You know that I have always been a Republican, but it has become evident to me that there is no use in fighting against fate, and that Napoleon's power is far too great to be shaken. This being so, I have tried to serve him, for it is well to howl when you are among wolves. I have been able to do so much for him that he has become my very good friend, so that I may ask him what I like in return. He is now, as you are probably aware, with the army at Boulogne, within a few miles of Grosbois. If you will come over at once he will certainly forget the hostility of your father in consideration of the services of your uncle. It is true that your name is still proscribed, but my influence with the Emperor will set that matter right. Come to me, then, come at once, and come with confidence. 'Your uncle, 'C. BERNAC.'

So much for the letter, but it was the outside which had puzzled me most. A seal of red wax had been affixed at either end, and my uncle had apparently used his thumb as a signet. One could see the little rippling edges of a coarse skin imprinted upon the wax. And then above one of the seals there was written in English the two words, 'Don't come.' It was hastily scrawled, and whether by a man or a woman it was impossible to say; but there it stared me in the face, that sinister addition to an invitation.

'Don't come!' Had it been added by this unknown uncle of mine on account of some sudden change in his plans? Surely that was inconceivable, for why in that case should he send the invitation at all? Or was it placed there by some one else who wished to warn me from accepting this offer of hospitality?...