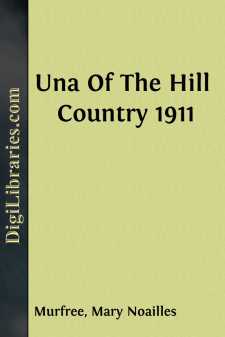 The old sawmill on Headlong Creek at the water-gap of Chilhowee Mountain was silent and still one day, its habit of industry suggested only in the ample expanse of sawdust spread thickly over a level open space in the woods hard by, to serve as footing for the "bran dance" that had been so long heralded and that was destined to end so strangely.

A barbecue had added its attractions, unrivalled in the estimation of the rustic epicure, but even while the shoats, with the delectable flavor imparted by underground roasting and browned to a turn, were under discussion by the elder men and the sun-bonneted matrons on a shady slope near the mill, where tablecloths had been spread beside a crystal spring, the dance went ceaselessly on, as if the flying figures were insensible of fatigue, impervious to hunger, immune from heat.

Indeed the youths and maidens of the contiguous coves and ridges had rarely so eligible an opportunity, for it is one of the accepted tenets of the rural religionist that dancing in itself is a deadly sin, and all the pulpits of the countryside had joined in fulminations against it Nothing less than a political necessity had compassed this joyous occasion. It was said to have been devised by the "machine" to draw together the largest possible crowd, that certain candidates might present their views on burning questions of more than local importance, in order to secure vigorous and concerted action at the polls in the luke-warm rural districts when these measures should go before the people, in the person of their advocates, at the approaching primary elections. However, even the wisdom of a political boss is not infallible, and despite the succulent graces of the barbecue numbers of the ascetic and jeans-clad elder worthies, though fed to repletion, collogued unhappily together among the ox-teams and canvas-hooded wagons on the slope, commenting sourly on the frivolity of the dance. These might be relied on to cast no ballots in the interest of its promoters, with whose views they were to be favored between the close of the feast and the final dance before sunset.

The trees waved full-foliaged branches above the circle of sawdust and dappled the sunny expanse with flickering shade, and as they swayed apart in the wind they gave evanescent glimpses of tiers on tiers of the faint blue mountains of the Great Smoky Range in the distance, seeming ethereal, luminous, seen from between the dark, steep, wooded slopes of the narrow watergap hard by, through which Headlong Creek plunged and roared. The principal musician, perched with his fellows on a hastily erected stand, was burly, red-faced, and of a jovial aspect. He had a brace of fiddlers, one on each side, but with his own violin under his double-chin he alone "called the figures" of the old-fashioned contradances. Now and again, with a wide, melodious, sonorous voice, he burst into a snatch of song:

"Shanghai chicken he grew so tall,In a few days—few days,Cannot hear him crow at all——-"

Sometimes he would intersperse jocund personal remarks in his Terpsichorean commands: "Gents, forward to the centre—back—swing: the lady ye love the best." Then in alternation, "Ladies, forward to the centre—back——" and as the mountain damsels teetered in expectation of the usual supplement of this mandate he called out in apparent expostulation, "Don't swing him, Miss—he don't wuth a turn."

Suddenly the tune changed and with great gusto he chanted forth:

the tempo rubato giving fresh impetus to the kaleidoscopic whirl of the dancers....