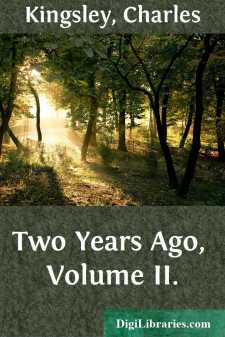 CHAPTER XV. THE CRUISE OF THE WATERWITCH.

The middle of August is come at last; and with it the solemn day on which Frederick Viscount Scoutbush may be expected to revisit the home of his ancestors. Elsley has gradually made up his mind to the inevitable, with a stately sulkiness: and comforts himself, as the time draws near, with the thought that, after all, his brother-in-law is not a very formidable personage.

But to the population of Aberalva in general, the coming event is one of awful jubilation. The shipping is all decked with flags; all the Sunday clothes have been looked out, and many a yard of new ribbon and pound of bad powder bought; there have been arrangements for a procession, which could not be got up; for a speech which nobody would undertake to pronounce; and, lastly, for a dinner, about which last there was no hanging back. Yea, also, they have hired from Carcarrow Church-town, sackbut, psaltery, dulcimer, and all kinds of music; for Frank has put down the old choir band at Aberalva,—another of his mistakes,—and there is but one fiddle and a clarionet now left in all the town. So the said town waits all the day on tiptoe, ready to worship, till out of the soft brown haze the stately Waterwitch comes sliding in, like a white ghost, to fold her wings in Aberalva bay.

And at that sight the town is all astir. Fishermen shake themselves up out of their mid-day snooze, to admire the beauty, as she slips on and on through water smooth as glass, her hull hidden by the vast curve of the balloon-jib, and her broad wings boomed out alow and aloft, till it seems marvellous how that vast screen does not topple headlong, instead of floating (as it seems) self-supporting above its image in the mirror. Women hurry to put on their best bonnets; the sexton toddles up with the church key in his hand, and the ringers at his heels; the Coastguard Lieutenant bustles down to the Manby's mortar, which he has hauled out in readiness on the pebbles. Old Willis hoists a flag before his house, and half-a-dozen merchant skippers do the same. Bang goes the harmless mortar, burning the British nation's powder without leave or licence; and all the rocks and woods catch up the echo, and kick it from cliff to cliff, playing at football with it till its breath is beaten out; a rolling fire of old muskets and bird-pieces crackles along the shore, and in five minutes a poor lad has blown a ramrod through his hand. Never mind, lords do not visit Penalva every day. Out burst the bells above with merry peal; Lord Scoutbush and the Waterwitch are duly "rung in" to the home of his lordship's ancestors; and he is received, as he scrambles up the pier steps from his boat, by the curate, the churchwardens, the Lieutenant, and old Tardrew, backed by half-a-dozen ancient sons of Anak, lineal descendants of the free fishermen to whom six hundred years before, St. Just of Penalva did grant privileges hard to spell, and harder to understand, on the condition of receiving, whensoever he should land at the quay head, three brass farthings from the "free fishermen of Aberalva."

Scoutbush shakes hands with curate, Lieutenant, Tardrew, churchwardens; and then come forward the three farthings, in an ancient leather purse....