Two Years Ago, Volume I 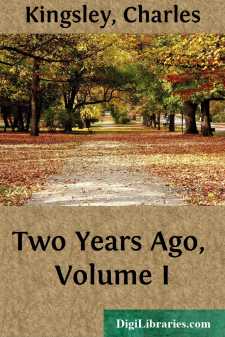 It may seem a somewhat Irish method of beginning the story of "Two Years Ago" by a scene which happened but a month since. And yet, will not the story be on that very account a better type of many a man's own experiences! How few of us had learnt the meaning of "Two Years Ago," until this late quiet autumn time; and till Christmas, too, with its gaps in the old ring of friendly faces, never to be filled up again on earth, began to teach us somewhat of its lesson.

Two years ago, while pestilence was hovering over us and ours; while the battle-roar was ringing in our ears; who had time to think, to ask what all that meant; to seek for the deep lesson which we knew must lie beneath? Two years ago was the time for work; for men to do with all their might whatsoever their hands found to do. But now the storm has lulled once more; the air has cleared awhile, and we can talk calmly over all the wonders of that sudden, strange, and sad "Two years ago."

So felt, at least, two friends who went down, just one week before Christmas-day, to Whitbury, in Berkshire. Two years ago had come to one of them, as to thousands more, the crisis of his life; and he was talking of it with his companion; and was on his way, too, to learn more of that story, which this book contains, and in which he had borne his part.

They wore both of them men who would at first sight interest a stranger. The shorter of the two he might have seen before—at picture sales, Royal Academy meetings, dinner parties, evening parties, anywhere and everywhere, in town; for Claude Mellot is a general favourite, and a general guest.

He is a tiny, delicate-featured man, with a look of half-lazy enthusiasm about his beautiful face, which reminds you much of Shelley's portrait; only he has what Shelley had not, clustering auburn curls, and a rich brown beard, soft as silk. You set him down at once as a man of delicate susceptibility, sweetness, thoughtfulness; probably (as he actually is) an artist.

His companion is a man of statelier stamp, tall, dark, and handsome, with a very large forehead; if the face has a fault, it is that the mouth is too small; that, and the expression of face too, and the tone of voice, seem to indicate over-refinement, possibly a too aristocratic exclusiveness. He is dressed like a very fine gentleman indeed, and looks and talks like one. Aristocrat, however, in the common sense of the word, he is not; for he is a native of the Model Republic, and sleeping-partner in a great New York merchant firm.

He is chatting away to Claude Mellot, the artist, about Frémont's election; and on that point seems to be earnest enough, though patient and moderate.

"My dear Claude, our loss is gain. The delay of the next four years was really necessary, that we might consolidate our party. And I leave you to judge, if it has grown to its present size in but a few months, what dimensions it will have attained before the next election. We require the delay, too, to discover who are our really best men; not merely as orators, but as workers; and you English ought to know better than any nation, that the latter class of men are those whom the world most needs—that though Aaron may be an altogether inspired preacher, yet it is only slow-tongued practical Moses, whose spokesman he is, who can deliver Israel from their taskmasters....