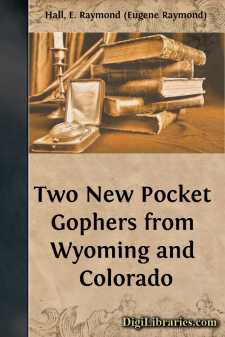 In the academic year of 1947-48 Montague studied the geographic variation in Thomomys talpoides of Wyoming. His study was based upon materials then in the University of Kansas Museum of Natural History. Publication of the results was purposely delayed until previously reported specimens from certain adjacent areas, especially in Colorado, could be examined. In the autumn of 1950 one of us, Hall, was able to examine the specimens from Colorado; also, the specimens from Wyoming accumulated in the past two seasons of field work in Wyoming were examined by Hall. A result of these studies is the recognition of two heretofore unnamed subspecies of the northern pocket gopher in southeastern Wyoming.

Grateful acknowledgment is made of the opportunity to study the Coloradon specimens in the Biological Surveys Collection of the United States National Museum, and of the financial assistance from the Kansas University Endowment Association which permitted the field work in Wyoming.

Descriptions and names for the two new subspecies are given below:

Range.—Southern Wyoming and south in the mountains of Colorado to the Arkansas River but not including the Colorado River drainage except in Grand County and part of Routt County.

Remarks.—Geographic variation is evident in the material examined. In the initial study, one of us, Montague, separated the material from the Medicine Bow Range in Wyoming as a subspecies different from that at Laramie and the adjoining mountains to the eastward because of the darker color of the western animals and the smaller size of males....