Two Expeditions into the Interior of Southern Australia - Volume 2 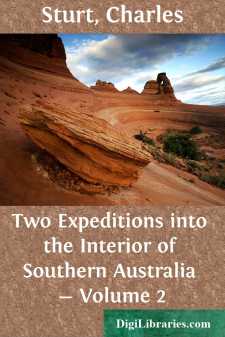 OBJECTS OF THE EXPEDITION.

The expedition of which we have just detailed the proceedings was so far satisfactory in its results, that it not only set at rest the hypothesis of the existence of an internal shoal sea in southern Australia, and ascertained the actual termination of the rivers it had been directed to trace, but also added very largely to our knowledge of the country considerably to the westward of former discoveries. And although no land had been traversed of a fertile description of sufficient extent to invite the settler, the fact of a large river such as the Darling lying at the back of our almost intertropical settlements, gave a fresh importance to the distant interior. It was evident that this river was the chief drain for carrying off the waters falling westerly from the eastern coast, and as its course indicated a decline of country diametrically opposite to that which had been calculated upon, it became an object of great importance to ascertain its further direction. Had not the saline quality of its waters been accounted for, by the known existence of brine springs in its bed, it would have been natural to have supposed that it communicated with some mediterranean sea; but, under existing circumstances, it remained to be proved whether this river held on a due south course, or whether it ultimately turned westerly, and ran into the heart of the interior. In order fully to determine this point, it would be necessary to regain it banks, so far below the parallel to which it had been traced as to leave no doubt of its identity; but it was difficult to fix upon a plan for approaching that central stream without suffering from the want of water, since it could hardly be expected that the Lachlan would afford such means, as it was reasonable to presume that its termination was very similar to that of the Macquarie. The attention of the government was, consequently, fixed upon the Morumbidgee, a river stated to be of considerable size and of impetuous current. Receiving its supplies from the lofty ranges behind Mount Dromedary, it promised to hold a longer course than those rivers which, depending on periodical rains alone for existence, had been found so soon to exhaust themselves.

The fitting out of another expedition was accordingly determined upon; and about the end of September 1829, I received the Governor's instructions to make the necessary preparations for a second descent into the interior, for the purpose of tracing the Morumbidgee, or such rivers as it might prove to be connected with, as far as practicable. In the event of failure in this object, it was hoped that an attempt to regain the banks of the Darling on a N.W. course from the point at which the expedition might be thwarted in its primary views, would not be unattended with success. Under any circumstances, however, by pursuing these measures, an important part of the colony would necessarily be traversed, of which the features were as yet altogether unknown.

It became my interest and my object to make the expedition as complete as possible, and, as far as in me lay, to provide for every contingency: and as it appeared to me that, in all likelihood, we should in one stage or other of our journey have to trust entirely to water conveyance, I determined on taking a whale-boat, whose dimensions and strength should in some measure be proportioned to the service required....