Two Expeditions into the Interior of Southern Australia - Complete 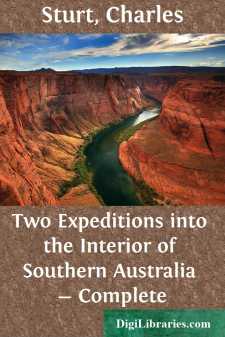 The completion of this Work affords me the opportunity I have long desired of thanking your Lordship thus publicly, for the kindness with which you acceded to my request to be permitted to dedicate it to you.

The encouragement your Lordship was pleased to give me has served to stimulate me in the prosecution of a task, which would, I fear, have been too great for me to have accomplished in my present condition, under any ordinary views of ambition. Indeed, labouring as I have been for many months past, under an almost total deprivation of sight, (the effect of exposure and anxiety of mind in the prosecution of geographical researches,) I owe it to the casual assistance of some of my friends, that I am at length enabled to lay these results before your Lordship and the public.

While I feel a painful conviction that many errors must necessarily pervade a work produced under such unfavourable circumstances, it affords me no small consolation to reflect that Your Lordship has been aware of my situation, and will be disposed to grant me every reasonable indulgence.

When I first determined on committing to the press a detailed account of the two expeditions, which I conducted into the interior of the Australian continent, pursuant to the orders of Lieutenant General Darling, the late Governor of the Colony of New South Wales, it was simply with a view of laying their results before the geographical world, and of correcting the opinions that prevailed with regard to the unexplored country to the westward of the Blue Mountains. I did not feel myself equal either to the task or the responsibility of venturing any remarks on the Colony of New South Wales itself. I had had little time for inquiry, amidst the various duties that fell to my lot in the ordinary routine of the service to which I belonged, when unemployed by the Colonial Government in the prosecution of inland discoveries....