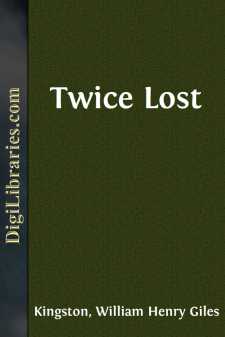 The last day of my home-life came to an end. Pierce and I went to our room and turned in to our beds, but not to sleep. We had still many things to say to each other, though we had probably said them over and over again before. I promised to write a journal, to show to him when I came back from my first voyage; and he agreed to keep one, from which he might make extracts when he wrote to me, so that I might know everything that took place in our family circle.

Our father, Mr Rayner, was a half-pay lieutenant; but at the end of the war, having no expectation of promotion, he had left the service and joined his elder brother, our Uncle Godfrey (after whom I was named), in a mercantile business at Bristol, near which city we lived. He knew nothing of office work, but hoped by diligence and attention to be of assistance. Our uncle, however, died before he had gained a thorough knowledge of the business; and, besides the sorrow he felt at losing one he loved, much responsibility in consequence devolved upon him. I believe that his affairs were not as prosperous as he could have desired; and he sometimes expressed his regret that he had engaged in an undertaking for which he was not fitted.

I had shown no predilection for a seat in the counting-house; and consequently, when his old shipmate Captain Bracewell, who had just been appointed to the command of the Heroine sloop-of-war, offered to take one of his sons as a midshipman, he allowed me, greatly to my delight, to enter the navy.

My sea-chest, already packed, stood at one end of the room, with my dirk and the uniform I was to put on next day lying upon it; in which, as may be supposed, I had already exhibited myself to Pierce and our sister Edith, who was younger than either of us, and naturally thought it, as she told me, very becoming; an opinion I also entertained, as did our mother, and—I flattered myself—the rest of the household.

At last Pierce’s voice grew more and more inarticulate, and he dropped off to sleep. I, after some time, was following his example, when the door opened, and our mother glided into the room, afraid of awakening me. I was conscious that she was bending over me: a tear dropped on my cheek, and I felt her loving kiss on my brow. I started up and passed my arm round her neck. She perhaps thought that it was the last time I should be with her alone on earth.

“Godfrey, my dear boy,” she said, “fear to offend God, and be faithful and true to him and to all men. He will ever prove your best Friend, here and throughout eternity.”

“I will, mother; indeed I will,” I answered, as soon as the beatings of my heart and the sobs which burst from my breast allowed me to speak.

“Hush,” she said at length; “we must not awaken Pierce. And you too, Godfrey, must go to sleep, to be ready for your journey to-morrow.”

She left me, but I could hear her breathing outside the door till she thought I had dropped off to sleep.

Next morning all the family were up to see me off....