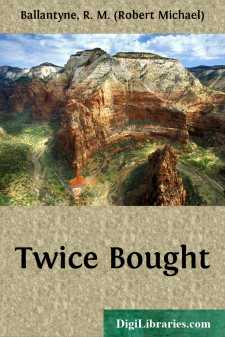 “‘Honesty is the best policy,’ Tom, you may depend on it,” said a youth to his companion, one afternoon, as they walked along the margin of one of those brawling rivulets which, born amid the snows of the Rocky Mountain peaks, run a wild and plunging course of many miles before finding comparative rest in the celebrated goldfields of Oregon.

“I don’t agree with you, Fred,” said Tom, sternly; “and I don’t believe in the proverb you have quoted. The world’s maxims are not all gospel.”

“You are right, Tom; many of them are false; nevertheless, some are founded on gospel truth.”

“It matters not,” returned Tom, angrily. “I have made up my mind to get back from that big thief Gashford what he has stolen from me, for it is certain that he cheated at play, though I could not prove it at the time. It is impossible to get it back by fair means, and I hold it quite allowable to steal from a thief, especially when that which you take is your own.”

Fred Westly shook his head, but did not reply. Many a time had he reasoned with his friend, Tom Brixton, about the sin of gambling, and urged him to be content with the result of each day’s digging for gold, but his words had no effect. Young Brixton had resolved to make a fortune rapidly. He laboured each day with pick and shovel with the energy of a hero and the dogged perseverance of a navvy, and each night he went to Lantry’s store to increase his gains by gambling. As a matter of course his “luck,” as he called it, varied. Sometimes he returned to the tent which he shared with his friend Westly, depressed, out of humour, and empty-handed. At other times he made his appearance flushed with success—occasionally, also, with drink,—and flung down a heavy bag of golden nuggets as the result of his evening’s play. Ultimately, when under the influence of drink, he staked all that he had in the world, except his clothes and tools, to a man named Gashford, who was noted for his size, strength of body, and utter disregard of God and man. As Brixton said, Gashford had cheated him at play, and this had rendered the ruined man unusually savage.

The sun was down when the two friends entered their tent and began to pull off their muddy boots, while a little man in a blue flannel shirt and a brown wide-awake busied himself in the preparation of supper.

“What have you got for us to-night, Paddy?” asked Westly.

“Salt pork it is,” said the little man, looking up with a most expressive grin; “the best o’ victuals when there’s nothin’ better. Bein’ in a luxurious frame o’ mind when I was up at the store, I bought a few split-pays for seasonin’; but it comes hard on a man to spind his gould on sitch things when his luck’s down. You’ve not done much to-day, I see, by the looks of ye.”

“Right, Paddy,” said Tom Brixton, with a harsh laugh; “we’ve done nothing—absolutely nothing. See, there is my day’s work.”

He pulled three small grains of gold, each about the size of a pea, from his trousers pocket, and flung them contemptuously into a washing-pan at his elbow....