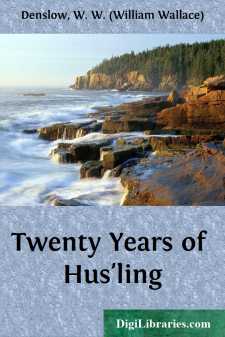 I was born near Ottawa, Illinois, January 6th, 1852, of Scotch-Irish descent. My great-great-grandfather Johnston was a Presbyterian clergyman, who graduated from the University of Edinburg, Scotland. My mother's name was Finch. The family originally came from New England and were typical Yankees as far as I have been able to trace them. My father, whose full name I bear, died six months previous to my birth. When two years of age my mother was married to a Mr. Keefer, of Ohio, a miller by trade and farmer by occupation. Had my own father lived he could not possibly have been more generous, affectionate, kind-hearted and indulgent than this step-father.

And until the day of his death, which occurred on the 10th of July, 1887, he was always the same. This tribute is due him from one who reveres his memory.

He had a family of children by his former wife, the youngest being a year or two older than myself. Two daughters were born of this marriage.

A mixed family like the Keefer household naturally occasioned more or less contention. More especially as the neighborhood contained those who took it upon themselves to regulate their neighbors' domestic affairs in preference to their own.

Consequently, in a few years, Mr. Keefer was severely criticised for not compelling me to do more work on the farm, and for the interest he took in schooling me.

As for myself, had I been hanged or imprisoned as often as those neighbors prophesied I would be, I would have suffered death and loss of freedom many times.

The farm life was distasteful to me from my earliest recollection. I cannot remember ever having done an hour's work in this capacity except under protest.

From this fact I naturally gained the reputation for miles around, of being the laziest boy in the country, with no possible or probable prospect of ever amounting to anything.

But they failed to give me credit for the energy required to walk three miles night and morning to attend the village school, which afforded better advantages than the district school.

When but a small lad my step-father gave me a cosset lamb which I raised with a promise from him to give me half the wool and all of the increase.

This, in a few years, amounted to a flock of over one hundred sheep. The sale of my share of the wool, together with the yield from a potato patch, which was a yearly gift from Mr. Keefer, was almost sufficient to clothe me and pay my school expenses.

I should here add, that the potatoes above mentioned were the product of the old gentleman's labor in plowing, planting, cultivating, digging and marketing.

While I was expected to do this work, I was seldom on hand except on the day of planting to superintend the job and see that the potatoes were actually put into the ground, and again on market day to receive the proceeds. During all my life on the farm, one great source of annoyance and trouble to my step-father was my constant desire to have him purchase everything that was brought along for sale, and to sell everything from the farm that was salable.

In other words, I was always anxious to have him go into speculation. I could not be too eager for a horse trade or the purchase of any new invention or farm implement that had the appearance of being a labor-saving machine.

Even the advent of a lightning-rod or insurance man delighted me, for it broke the monotony and gave me some of the variety of life.

The rapid growth and development of my flock of sheep were partially due to my speculative desires. I was persistent in having them gratified, and succeeded, by being allowed the privilege of selling off the fat wethers whenever they became marketable, and replacing them with young ewes, which increased rapidly....