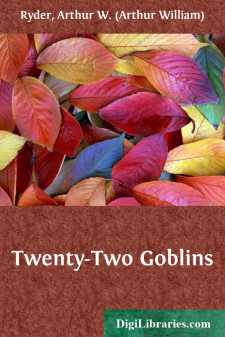 On the bank of the Godavari River is a kingdom called the Abiding Kingdom. There lived the son of King Victory, the famous King Triple-victory, mighty as the king of the gods. As this king sat in judgment, a monk called Patience brought him every day one piece of fruit as an expression of homage. And the king took it and gave it each day to the treasurer who stood near. Thus twelve years passed.

Now one day the monk came to court, gave the king a piece of fruit as usual, and went away. But on this day the king gave the fruit to a pet baby monkey that had escaped from his keepers, and happened to wander in. And as the monkey ate the fruit, he split it open, and a priceless, magnificent gem came out.

When the king saw this, he took it and asked the treasurer: "Where have you been keeping the fruits which the monk brought? I gave them to you." When the treasurer heard this, he was frightened and said: "Your Majesty, I have thrown them all through the window. If your Majesty desires, I will look for them now." And when the king had dismissed him, he went, but returned in a moment, and said again: "Your Majesty, they were all smashed in the treasury, and in them I see heaps of dazzling gems."

When he heard this, the king was delighted, and gave the jewels to the treasurer. And when the monk came the next day, he asked him: "Monk, why do you keep honouring me in such an expensive way? Unless I know the reason, I will not take your fruit."

Then the monk took the king aside and said: "O hero, there is a business in which I need help. So I ask for your help in it, because you are a brave man." And the king promised his assistance.

Then the monk was pleased, and said again: "O King, on the last night of the waning moon, you must go to the great cemetery at nightfall, and come to me under the fig-tree." Then the king said "Certainly," and Patience, the monk, went home well pleased.

So when the night came, the mighty king remembered his promise to the monk, and at dusk he wrapped his head in a black veil, took his sword in his hand, and went to the great cemetery without being seen. When he got there, he looked about, and saw the monk standing under the fig-tree and making a magic circle. So he went up and said: "Monk, here I am. Tell me what I am to do for you."

And when the monk saw the king, he was delighted and said: "O King, if you wish to do me a favour, go south from here some distance all alone, and you will see a sissoo tree and a dead body hanging from it. Be so kind as to bring that here."

When the brave king heard this, he agreed, and, true to his promise, turned south and started. And as he walked with difficulty along the cemetery road, he came upon the sissoo tree at some distance, and saw a body hanging on it. So he climbed the tree, cut the rope, and let it fall to the ground. And as it fell, it unexpectedly cried aloud, as if alive. Then the king climbed down, and thinking it was alive, he mercifully rubbed its limbs. Then the body gave a loud laugh....