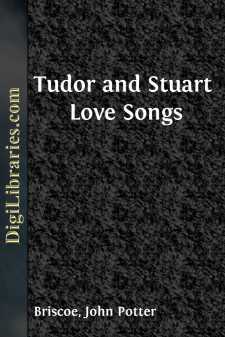 The spirit of reform which was developed during the early part of the sixteenth century brought about a desire on the part of young men of means to travel on the continent of Europe. This was for the purpose of making themselves acquainted with the politics, social life, literature, art, science, and commerce of the various nations of the same, especially of France, Spain, and Italy. These young Englishmen on their return introduced into the society in which they mixed not only the politenesses of these countries, but the wit of Italy, and the character of the poetry which was then in vogue in Southern Europe. Among these travellers during the reign of Henry the Eighth were Sir Thomas Wyatt and the Earl of Surrey. These courtiers possessed the poetical faculty, and therefore paid special attention to literary form. As a result they introduced the Sonnet of the Petrarchan type into England. The amorous verse of the inhabitants of these sunny climes took hold of the young Englishmen. Many men of rank and education, who did not regard themselves as of the world of letters, penned pleasant verse, much of it being of an amatory character based upon that of the Italians. During the reign of "Good Queen Bess" England was full of song. Of the writers of love verses William Watson occupied a very high, probably the highest, position during the time of Elizabeth. A glance at the Table of Contents of this volume will show that some of the best poets who were born between the years 1503 and 1679 have handed down to us poetical contributions of this character.

Of the Elizabethan amatory verses only a small portion has been transmitted to us. That which possessed least literary merit did not long survive, and, no doubt, some of considerable merit has been lost too. The best has been preserved. Selections from these, arranged in chronological order, appear in this anthology. Richard Tottel printed his "Miscellany" in 1557. It is to this work, and to Richard Edwards' "Paradise of Dainty Devices," issued nineteen years later, that much of the best poetical literature of the sixteenth century has come down to us. The first-named passed through eight editions during thirty years: the last issue being dated 1587.

From the amatory verses produced by seventy-one writers during the reign of Henry the Eighth and down to those of the early Georges one hundred and thirteen appear in this love anthology. The limitation of space prevents further biographical particulars being given than the years of birth and death, which will be found in the Table of Contents. As writers do not always agree in this respect, "The Dictionary of National Biography" has been taken as the authority.

Whatever labour has been bestowed on the preparation of this anthology has not been in bulking it out to its present dimensions, but rather in keeping it within the prescribed limits; and, at the same time, furnishing these best examples of the love verses of the numerous authors who have been requisitioned for the purpose of this volume of "Tudor and Stuart Love Songs."