Try Again or, the Trials and Triumphs of Harry West. A Story for Young Folks 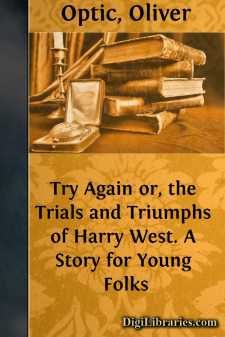 Squire Walker was a very pompous man; one of the most notable persons in the little town of Redfield, which, the inquiring young reader will need to be informed, as it is not laid down on any map of Massachusetts that I am acquainted with, is situated thirty-one miles southwest of Boston.

I am not aware that Redfield was noted for anything in particular, unless it was noted for Squire Walker, as Mount Vernon was noted for Washington, and Monticello for Jefferson. No doubt the squire thought he was as great a man as either of these, and that the world was strangely stupid because it did not find out how great a man he really was. It was his misfortune that he was born in the midst of stirring times, when great energy, great genius, and the most determined patriotism are understood and appreciated.

Squire Walker, then, was a great man—in his own estimation. It is true, the rest of the world, including many of the people of Redfield, had not found it out; but, as the matter concerned himself more nearly than any one else, he seemed to be resigned to the circumstances of his lot. He had represented the town in the legislature of the state, was a member of the school committee, one of the selectmen, and an overseer of the poor. Some men would have considered all these offices as glory enough for a lifetime; and I dare say the squire would have been satisfied, if he had not been ambitious to become one of the county commissioners.

The squire had a very high and proper regard for his own dignity. It was not only his duty to be a great man, but to impress other people, especially paupers and children, with a just sense of his importance. Consequently, when he visited the poorhouse, he always spoke in the imperative mood. It was not becoming a man of his magnificent pretensions to speak gently and kindly to the unfortunate, the friendless, and the forsaken; and the men and women hated him, and the children feared him, as much as they would have feared a roaring lion.

"Boy, come here!" said Squire Walker, as he raised his arm majestically towards a youth who was picking up "windfalls" under the apple trees in front of the poorhouse.

The boy was dressed in a suit of blue cotton clothes, extensively, but not very skillfully patched. At last two-thirds of the brim of his old straw hat was gone, leaving nothing but a snarly fringe of straws to protect his face from the heat of the sun. But this was the least of the boy's trials. Sun or rain, heat or cold, were all the same to him, if he only got enough to eat, and time enough to sleep.

He straightened his back when Squire Walker spoke to him, and stood gazing with evident astonishment that the distinguished gentleman should condescend to speak to him.

"Come here, you sir! Do you hear?" continued Squire Walker, upon whom the boy's look of wonder and perturbation was not wholly lost.

"This way, Harry," added Mr. Nason, the keeper of the poorhouse, who was doing the honors of the occasion to the representative of the people of Redfield.

Harry West was evidently a modest youth, and appeared to be averse to pushing himself irreverently into the presence of a man whom his vivid imagination classed with Alexander the Great and Julius Cæsar, whose great deeds he had read about in the spelling book.

Harry slowly sidled along till he came within about a rod of the great man, where he paused, apparently too much overawed to proceed any farther.

"Come here, I say," repeated Squire Walker. "Why don't you take your hat off, and make your manners?"

Harry took his hat off, and made his manners, not very gracefully, it is true; but considering the boy's perturbation, the squire was graciously pleased to let his "manners" pass muster.

"How old are you, boy?" asked the overseer.

"Most twelve," replied Harry, with deference.

"High time you were put to work."

"I do work," answered Harry.

"Not much; you look as fat and lazy as one of my fat hogs."

Mr. Nason ventured to suggest that Harry was a smart, active boy, willing to work, and that he more than paid his keeping by the labor he performed in the field, and the chores he did about the house—an interference which the squire silently rebuked, by turning up his nose at the keeper.

"I do all they want me to do," added the boy, whose tongue seemed to grow wonderfully glib under the gratuitous censure of the notable gentleman....