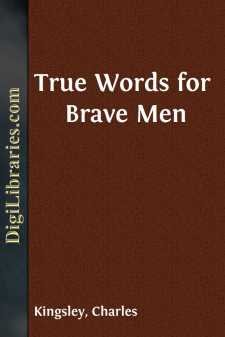 I.  THE GOOD CENTURION; OR, THE MAN UNDER AUTHORITY.

“And when Jesus was entered into Capernaum, there came unto Him a centurion, beseeching Him and saying, Lord, my servant lieth at home, sick of the palsy, grievously tormented.  And Jesus said unto him, I will come and heal him.  The centurion answered and said, Lord, I am not worthy that Thou shouldest come under my roof: but speak the word only, and my servant shall be healed.  For I am a man under authority, having soldiers under me, and I say unto this man, Go, and he goeth; and to another, Come, and he cometh; and to my servant, Do this, and he doeth it.  When Jesus heard it, he marvelled, and said to them that followed, Verily I say unto you, I have not found such great faith, no, not in Israel.”—Matt. viii. 5-10.

We find in Holy Scripture, that of the seven heathens who were first drawn to our Lord Jesus Christ and His gospel, three were soldiers.

The first was the Centurion, of whom our Lord speaks in such high terms of commendation.

The next, the Centurion who stood by His cross, and said, “Truly this was the son of God.”  Old legends say that his name was Longinus, and tell graceful tales of his after-life, which one would fain believe, if there were any evidence of their truth.

The third, of course, was Cornelius, of whom we read in the Acts of the Apostles.

Now these three Centurions—commanding each a hundred men—had probably risen from the ranks; they were not highly educated men; they had seen endless cruelty and immorality; they may have had, at times, to do ugly work themselves, in obedience to orders.  They were doing, at the time when they are mentioned in Scripture, almost the worst work which a soldier can do.  For they were not defending their own country against foreign enemies.  They were keeping down a conquered nation, by a stern military despotism, in which the soldiery acted not merely as police, but as gaolers and executioners.  And yet three men who had such work as this to do, are singled out in Scripture to become famous through all time, as the first-fruits of the heathen; and of one of them our Lord said, “I have not found such great faith, no, not in Israel.”

Let us take the case of this first Centurion, and see if it will tell us.  We will not invent any reasons of our own for his great faith.  We will let him give his own reasons.  We will let him tell his own story.  We may trust it; for our blessed Lord approved of it.  Our Lord plainly thought that what the soldier had spoken, he had spoken well.  And yet it is somewhat difficult to understand what was in his mind.  He was plainly no talker; no orator.  Like many a good English soldier, sailor, yeoman, man of business, he had very sound instincts in him, and drew very sound conclusions from them: but he could not put them into words.  He knew that he was right, but he could not make a speech about it.  Better that, than be—as too many are—ready to make glib speeches, which they only half believe themselves; ready to deceive themselves with subtle arguments and high-flown oratory, till they can give the most satisfactory reasons for doing the most unsatisfactory and unreasonable things.  No, the good soldier was no orator: but he had sound sense under his clumsy words.  Let us listen to them once more.

“I am a man under authority, having soldiers under me.  And I say to this man, Go, and he goeth; and to another, Come, and he cometh; and to my servant, Do this, and he doeth it.”  Surely the thought which was in his mind is to be found in the very words which he used—Authority.  Subordination.  Discipline.  Obedience.  He was under authority, and must obey his superior officer.  He had soldiers under him, and they must obey him.  There must be not only no mutiny, but no neglect, no arguing, no asking why.  If he said Go, a man must go; if he said Come, a man must come; and make no words about it.  Otherwise the Emperor’s service would go to ruin, through laziness, distrust, and mutinous talk.  By subordination, by discipline, by mutual trust and strict obedience, that empire of Rome was conquering the old world; because every Roman knew his place, and every Roman did what he was told....