True Version of the Philippine Revolution 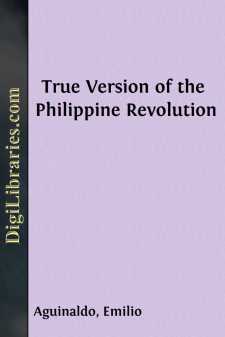 Spain maintained control of the Philippine Islands for more than three centuries and a half, during which period the tyranny, misconduct and abuses of the Friars and the Civil and Military Administration exhausted the patience of the natives and caused them to make a desperate effort to shake off the unbearable galling yoke on the 26th and 31st August, 1896, then commencing the revolution in the provinces of Manila and Cavite.

On these memorable days the people of Balintawak, Santa Mesa, Kalookan, Kawit, Noveleta and San Francisco de Malabon rose against the Spaniards and proclaimed the Independence of the Philippines, and in the course of the next five days these uprisings were followed by the inhabitants of the other towns in Cavite province joining in the revolt against the Spanish Government although there was no previous arrangement looking to a general revolt. The latter were undoubtedly moved to action by the noble example of the former.

With regard to the rising in the province of Cavite it should be stated that although a call to arms bearing the signatures of Don Augustin Rieta, Don Candido Firona and myself, who were Lieutenants of the Revolutionary Forces, was circulated there was no certainty about the orders being obeyed, or even received by the people, for it happened that one copy of the orders fell into the hands of a Spaniard named Don Fernando Parga, Military Governor of the province, who at that time was exercising the functions of Civil Governor, who promptly reported its contents to the Captain-General of the Philippines, Don Ramon Blanco y Erenas. The latter at once issued orders for the Spanish troops to attack the revolutionary forces.

It would appear beyond doubt that One whom eye of man hath not seen in his wisdom and mercy ordained that the emancipation of the oppressed people of the Philippines should be undertaken at this time, for otherwise it is inexplicable how men armed only with sticks and gulok wholly unorganized and undisciplined, could defeat the Spanish Regulars in severe engagements at Bakoor, Imus and Noveleta and, in addition to making many of them prisoners, captured a large quantity of arms and ammunition. It was owing to this astonishing success of the revolutionary troops that General Blanco quickly concluded to endeavour, to maintain Spanish control by the adoption of a conciliatory policy under the pretext that thereby he could quel the rebellion, his first act being a declaration to the effect that it was not the purpose of his Government to oppress the people and he had no desire “to slaughter the Filipinos.”.

The Government of Madrid disapproved of General Blanco's new policy and speedily appointed Lieutenant-General Don Camilo Polavieja to supersede him, and despatched forthwith a large number of Regulars to the Philippines.

General Polavieja advanced against the revolutionary forces with 16,000 men armed with Mausers, and one field battery. He had scarcely reconquered half of Cavite province when he resigned, owing to bad health....