True to His Home A Tale of the Boyhood of Franklin 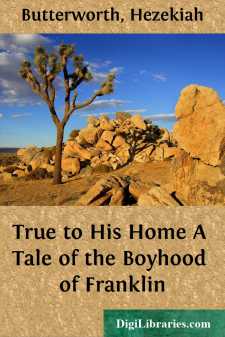 This volume is an historical fiction, but the plan of it was suggested by biography, and is made to include the most interesting and picturesque episodes in the home side of the life of Benjamin Franklin, so as to form a connected narrative or picture of his public life.

I have written no book with a deeper sympathy with my subject, for, although fiction, the story very truthfully shows that the good intentions of a life which has seemed to fail do not die, but live in others whom they inspire. Uncle Benjamin Franklin, "the poet," who was something of a philosopher, and whose visions all seemed to end in disappointment, deeply influenced his nephew and godson, Benjamin Franklin, whom he morally educated to become what he himself had failed to be.

The conduct of Josiah Franklin, the father of Benjamin Franklin, in comforting his poor old brother in England by naming his fifteenth child for him, and making him his godfather, is a touching instance of family affection, to the memory of which the statesman was always true.

Uncle Benjamin Franklin had a library of pamphlets that was very dear to him, for in the margins of the leaves he had placed the choicest thoughts of his life amid great political events. He was very poor, and he sold his library in his old age; we may reasonably suppose that he parted with it among other effects to get money to come to America, that he might give his influence to "Little Ben," after his brother had remembered him in his desolation by giving his name to the boy. The finding of these pamphlets in London fifty years after the old man was compelled to sell them was regarded by Benjamin Franklin as one of the most singular events of his remarkable life.

Mr. Parton, in his Life of Franklin, thus alludes to the circumstance:

A strange occurrence brought to the mind of Franklin, in 1771, a vivid recollection of his childhood. A dealer in old books, whose shop he sometimes visited, called his attention one day to a collection of pamphlets, bound in thirty volumes, dating from the Restoration to 1715. The dealer offered them to Franklin, as he said, because many of the subjects of the pamphlets were such as usually interested him. Upon examining the collection, he found that one of the blank leaves of each volume contained a catalogue of its contents, and the price each pamphlet had cost; there were notes and comments also in the margin of several of the pieces. A closer scrutiny revealed that the handwriting was that of his Uncle Benjamin, the rhyming friend and counselor of his childhood. Other circumstances combined with this surprising fact to prove that the collection had been made by his uncle, who had probably sold it when he emigrated to America, fifty-six years before. Franklin bought the volumes, and gave an account of the circumstance to his Uncle Benjamin's son, who still lived and flourished in Boston. "The oddity is," he wrote, "that the bookseller, who could suspect nothing of any relation between me and the collector, should happen to make me the offer of them."

It may please the reader to know that "Mr....