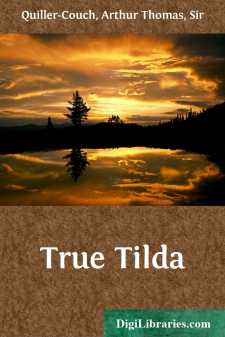 CHAPTER I AT THE SIGN OF THE GOOD SAMARITAN

"That it may please Thee to preserve all that travel by land or by water . . . all sick persons, and young children."—THE LITANY.

"I love my love with a H'aitch, because he's 'andsome—"

Tilda turned over on her right side—she could do so now without pain— and lifting herself a little, eyed the occupant of the next bed. The other six beds in the ward were empty.

The figure in the next bed stirred feebly; the figure of a woman, straight and gaunt under the hospital bedclothes. A tress of her hair had come uncoiled and looped itself across the pillow—reddish auburn hair, streaked with grey. She had been brought in, three nights ago, drenched, bedraggled, chattering in a high fever; a case of acute pneumonia. Her delirium had kept Tilda—who was preternaturally sharp for her nine years—awake and curious during the better part of two night-watches. Thereafter, for a day and a night and half a day, the patient had lain somnolent, breathing hard, at intervals feebly conscious. In one of these intervals her eyes had wandered and found the child; and since then had painfully sought her a dozen times, and found her again and rested on her.

Tilda, meeting that look, had done her best. The code of the show-folk, to whom she belonged, ruled that persons in trouble were to be helped. Moreover, the long whitewashed ward, with its seven oblong windows set high in the wall—the smell of it, the solitude, the silence—bored her inexpressibly. She had lain here three weeks with a hurt thigh-bone bruised, but luckily not splintered, by the kick of a performing pony.

The ward reeked of yellow soap and iodoform. She would have exchanged these odours at the price of her soul—but souls are not vendible, and besides she did not know she possessed one—for the familiar redolences of naphtha and horse-dung and trodden turf. These were far away: they had quite forsaken her, or at best floated idly across her dreams. What held her to fortitude had been the drone and intermittent hoot of a steam-organ many streets away. It belonged to a roundabout, and regularly tuned up towards evening; so distant that Tilda could not distinguish one tune from another; only the thud of its bass mingled with the buzz of a fly on the window and with the hard breathing of the sick woman.

Sick persons must be amused: and Tilda, after trying the patient unsuccessfully with a few jokes from the repertoire of her own favourite clown, had fallen back upon "I love my love"—about the only game known to her that dispensed with physical exertion.

The figure beneath the bedclothes did not stir. Tilda lifted herself an inch higher on the elbow; lifted her voice too as she went on:

She had been watching, expecting some effect. But it scared her when, after a moment, the woman raised herself slowly, steadily, until half-erect from the waist....