True Stories of Crime From the District Attorney's Office 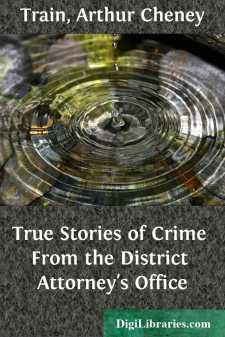 I The Woman in the Case

On a sultry August afternoon in 1903, a dapper, if somewhat anaemic, young man entered the Broadway store of Rogers, Peet & Company, in New York City, and asked to be allowed to look at a suit of clothes. Having selected one to his fancy and arranged for some alterations, he produced from his wallet a check for $280, drawn to the order of George B. Lang, and signed E. Bierstadt, and remarked to the attentive salesman:

"I haven't got quite enough cash with me to pay for these, but I have been intending to cash this check all the afternoon. Of course, you don't know me or even that my name is Lang, but if you will forward the check to the bank they will certify it, and to-morrow I will send for the suit and the balance of the money."

"Certainly, Mr. Lang," replied the salesman. "I will hold the suit and the money to await your orders."

The customer thanked him and took his departure. The check was sent to the bank, the bank certified it, then cancelled its certification and returned the check to Rogers, Peet & Company, and the store detectives, having communicated with Police Headquarters, anxiously awaited the arrival of Mr. Lang's messenger.

FIG. 1.—Envelope on the back of which Parker's forged order was written.

Their efforts were rewarded a couple of days later by the appearance at the store of a lad who presented a written order (Fig. 1 and Fig. 2) inscribed upon the back of an envelope bearing a cancelled stamp and addressed to Geo. B. Lang, No. 13 West Twenty-sixth Street, New York City, which read as follows:

Please give to bearer the clothes I purchased on Tuesday—suit—pants—S. coat, and also kindly put change in envelope in inside coat pocket. Trusting the alterations are satisfactory, and thanking you in advance for the favor and for past courtesies, I am,

FIG. 2.—Parker's order on Rogers, Peet & Company, in the name of Lang.

The boy was immediately placed under arrest, and after proclaiming his own innocence and vociferating that he was only doing an errand for a "gent," who was waiting close by, was directed to return with his bundle as if nothing had occurred. This he did, and Mr. George B. Lang was soon in the clutches of the law.

Interrogated by his captors, the supposed Lang admitted that his real name was James Parker, that he lived at 110 West Thirty-eighth Street, and only requested that his wife be immediately notified of what had happened. At Headquarters the prisoner was identified as a gentleman who had been very actively engaged during the preceding months in passing bad checks throughout the city, his more recent operations having consisted in cashing a check on the Lincoln National Bank for $160 on July 20th, one for $290 on the same bank on July 30th, still another for $510.50 on August 4th, and one for $440.50 on the National Shoe and Leather Bank, "to bearer," on August 8th. This last, in some inexplicable way, had been cashed at the very bank itself....