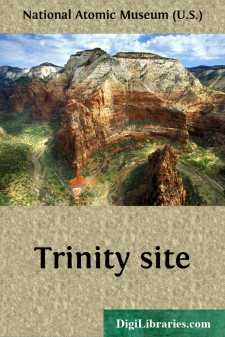 On Monday morning July 16, 1945, the world was changed forever when the first atomic bomb was tested in an isolated area of the New Mexico desert. Conducted in the final month of World War II by the top-secret Manhattan Engineer District, this test was code named Trinity. The Trinity test took place on the Alamogordo Bombing and Gunnery Range, about 230 miles south of the Manhattan Project's headquarters at Los Alamos, New Mexico. Today this 3,200 square mile range, partly located in the desolate Jornada del Muerto Valley, is named the White Sands Missile Range and is actively used for non-nuclear weapons testing.

Before the war the range was mostly public and private grazing land that had always been sparsely populated. During the war it was even more lonely and deserted because the ranchers had agreed to vacate their homes in January 1942. They left because the War Department wanted the land to use as an artillery and bombing practice area. In September 1944, a remote 18 by 24 square mile portion of the north-east corner of the Bombing Range was set aside for the Manhattan Project and the Trinity test by the military.

The selection of this remote location in the Jornada del Muerto Valley for the Trinity test was from an initial list of eight possible test sites. Besides the Jornada, three of the other seven sites were also located in New Mexico: the Tularosa Basin near Alamogordo, the lava beds (now the El Malpais National Monument) south of Grants, and an area southwest of Cuba and north of Thoreau. Other possible sites not located in New Mexico were: an Army training area north of Blythe, California, in the Mojave Desert; San Nicolas Island (one of the Channel Islands) off the coast of Southern California; and on Padre Island south of Corpus Christi, Texas, in the Gulf of Mexico. The last choice for the test was in the beautiful San Luis Valley of south-central Colorado, near today's Great Sand Dunes National Monument.

Based on a number of criteria that included availability, distance from Los Alamos, good weather, few or no settlements, and that no Indian land would be used, the choices for the test site were narrowed down to two in the summer of 1944. First choice was the military training area in southern California. The second choice, was the Jornada del Muerto Valley in New Mexico. The final site selection was made in late August 1944 by Major General Leslie R. Groves, the military head of the Manhattan Project. When General Groves discovered that in order to use the California location he would need the permission of its commander, General George Patton, Groves quickly decided on the second choice, the Jornada del Muerto. This was because General Groves did not want anything to do with the flamboyant Patton, who Groves had once described as "the most disagreeable man I had ever met." Despite being second choice the remote Jornada was a good location for the test, because it provided isolation for secrecy and safety, was only 230 miles south of Los Alamos, and was already under military control....