Trials and Confessions of a Housekeeper 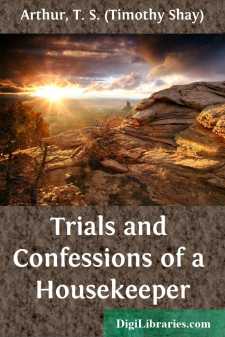 CHAPTER I. MY SPECULATION IN CHINA WARE.

THIS happened a very few years after, my marriage, and is one of those feeling incidents in life that we never forget. My husband's income was moderate, and we found it necessary to deny ourselves many little articles of ornament and luxury, to the end that there might be no serious abatement in the comforts of life. In furnishing our house, we had been obliged to content ourselves mainly with things useful. Our parlor could boast of nine cane-seat chairs; one high-backed cane-seat rocking chair; a pair of card tables; a pair of ottomans, the covers for which I had worked in worsted; and a few illustrated books upon the card tables. There were no pictures on the walls, nor ornaments on the mantle pieces.

For a time after my marriage with Mr. Smith, I did not think much about the plainness of our style of living; but after a while, contracts between my own parlors and those of one or two friends, would take place in my mind; and I often found myself wishing that we could afford a set of candelabras, a pair of china vases, or some choice pieces of Bohemian glass. In fact, I set my heart on something of the kind, though I concealed the weakness from my husband.

Time stole on, and one increase after another to our family, kept up the necessity for careful expenditure, and at no time was there money enough in the purse to justify any outlay beyond what the wants of the household required. So my mantel pieces remained bare as at first, notwithstanding the desire for something to put on them still remained active.

One afternoon, as I sat at work renovating an old garment, with the hope of making it look almost "as good as new," my cook entered and said—

"There's a man down stairs, Mrs. Smith, with a basket full of the most beautiful glass dishes and china ornaments that you ever did see; and he says that he will sell them for old clothes."

"For old clothes?" I responded, but half comprehending what the girl meant.

"Yes ma'am. If you have got an old coat, or a pair of pantaloons that ain't good for nothing, he will buy them, and pay you in glass or china."

I paused for a moment to think, and then said—

"Tell him to come up into the dining room, Mary."

The girl went down stairs, and soon came back in company with a dull looking old man, who carried on his arm a large basket, in which were temptingly displayed rich china vases, motto and presentation cups and saucers, glass dishes, and sundry other articles of a like character.

"Any old coats, pantaloons or vests?" said the man, as he placed, carefully, his basket on the floor. "Don't want any money. See here! Beautiful!"

And as he spoke, he took up a pair of vases and held them before my eyes. They were just the thing for my mantle pieces, and I covetted them on the instant.

"What's the price?" I enquired.

My husband was the possessor of a coat that had seen pretty good service, and which he had not worn for some time....