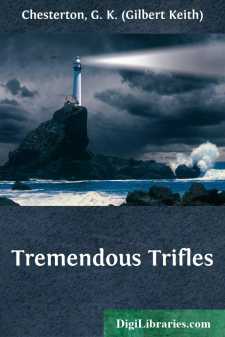 Once upon a time there were two little boys who lived chiefly in the front garden, because their villa was a model one. The front garden was about the same size as the dinner table; it consisted of four strips of gravel, a square of turf with some mysterious pieces of cork standing up in the middle and one flower bed with a row of red daisies. One morning while they were at play in these romantic grounds, a passing individual, probably the milkman, leaned over the railing and engaged them in philosophical conversation. The boys, whom we will call Paul and Peter, were at least sharply interested in his remarks. For the milkman (who was, I need say, a fairy) did his duty in that state of life by offering them in the regulation manner anything that they chose to ask for. And Paul closed with the offer with a business-like abruptness, explaining that he had long wished to be a giant that he might stride across continents and oceans and visit Niagara or the Himalayas in an afternoon dinner stroll. The milkman producing a wand from his breast pocket, waved it in a hurried and perfunctory manner; and in an instant the model villa with its front garden was like a tiny doll's house at Paul's colossal feet. He went striding away with his head above the clouds to visit Niagara and the Himalayas. But when he came to the Himalayas, he found they were quite small and silly-looking, like the little cork rockery in the garden; and when he found Niagara it was no bigger than the tap turned on in the bathroom. He wandered round the world for several minutes trying to find something really large and finding everything small, till in sheer boredom he lay down on four or five prairies and fell asleep. Unfortunately his head was just outside the hut of an intellectual backwoodsman who came out of it at that moment with an axe in one hand and a book of Neo-Catholic Philosophy in the other. The man looked at the book and then at the giant, and then at the book again. And in the book it said, "It can be maintained that the evil of pride consists in being out of proportion to the universe." So the backwoodsman put down his book, took his axe and, working eight hours a day for about a week, cut the giant's head off; and there was an end of him.

Such is the severe yet salutary history of Paul. But Peter, oddly enough, made exactly the opposite request; he said he had long wished to be a pigmy about half an inch high; and of course he immediately became one. When the transformation was over he found himself in the midst of an immense plain, covered with a tall green jungle and above which, at intervals, rose strange trees each with a head like the sun in symbolic pictures, with gigantic rays of silver and a huge heart of gold. Toward the middle of this prairie stood up a mountain of such romantic and impossible shape, yet of such stony height and dominance, that it looked like some incident of the end of the world. And far away on the faint horizon he could see the line of another forest, taller and yet more mystical, of a terrible crimson colour, like a forest on fire for ever....