Treatise on Parents and Children 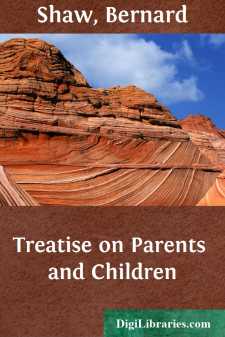 The Child is Father to the Man

Is he? Then in the name of common sense why do we always treat children on the assumption that the man is father to the child? Oh, these fathers! And we are not content with fathers: we must have godfathers, forgetting that the child is godfather to the man. Has it ever struck you as curious that in a country where the first article of belief is that every child is born with a godfather whom we all call "our father which art in heaven," two very limited individual mortals should be allowed to appear at its baptism and explain that they are its godparents, and that they will look after its salvation until it is no longer a child. I had a godmother who made herself responsible in this way for me. She presented me with a Bible with a gilt clasp and edges, larger than the Bibles similarly presented to my sisters, because my sex entitled me to a heavier article. I must have seen that lady at least four times in the twenty years following. She never alluded to my salvation in any way. People occasionally ask me to act as godfather to their children with a levity which convinces me that they have not the faintest notion that it involves anything more than calling the helpless child George Bernard without regard to the possibility that it may grow up in the liveliest abhorrence of my notions.

A person with a turn for logic might argue that if God is the Father of all men, and if the child is father to the man, it follows that the true representative of God at the christening is the child itself. But such posers are unpopular, because they imply that our little customs, or, as we often call them, our religion, mean something, or must originally have meant something, and that we understand and believe that something.

However, my business is not to make confusion worse confounded, but to clear it up. Only, it is as well to begin by a sample of current thought and practice which shews that on the subject of children we are very deeply confused. On the whole, whatever our theory or no theory may be, our practice is to treat the child as the property of its immediate physical parents, and to allow them to do what they like with it as far as it will let them. It has no rights and no liberties: in short, its condition is that which adults recognize as the most miserable and dangerous politically possible for themselves: namely, the condition of slavery. For its alleviation we trust to the natural affection of the parties, and to public opinion. A father cannot for his own credit let his son go in rags. Also, in a very large section of the population, parents finally become dependent on their children. Thus there are checks on child slavery which do not exist, or are less powerful, in the case of manual and industrial slavery. Sensationally bad cases fall into two classes, which are really the same class: namely, the children whose parents are excessively addicted to the sensual luxury of petting children, and the children whose parents are excessively addicted to the sensual luxury of physically torturing them....