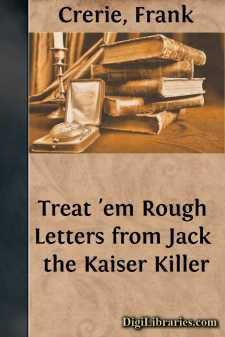 FRIEND AL: Well Al I am writeing this in the recreation room at our barracks and they's about 20 other of the boys writeing letters and I will bet some of the letters is rich because half of the boys can't talk english to say nothing about writeing letters and etc. We got a fine bunch in my Co. Al and its a cinch I won't never die in the trenchs because I will be murdered in my bed before we ever get out of here only they don't call it bed in the army.

They call it bunk and no wonder.

Well Al I have been here since Wed. night and now it is Sunday and this is the first time I have not felt sick since we got here and even at that my left arm is so sore it is pretty near killing me where I got vacinated. Its a good thing I am not a left hander Al or I couldn't get a ball up to the plate but of course I don't have to think of that now because I am out of baseball now and in the big game but at that I guess a left hander could get along just as good with a sore arm because I never seen one of them yet that could break a pain of glass with their fast ball and if they didn't have all the luck in the world they would be rideing around the country in a side door Pullman with all their baggage on.

Speaking about baseball Al I suppose you seen where the White Sox have cinched the penant and they will be splitting the world serious money while I am drawing $30.00 per mo. from the Govmt. but 50 yrs. from now the kids will all stop me on the st. and make me tell them what hotel we stayed at in Berlin and when Cicotte and Faber and Russell begins to talk about what they done to the Giants everybody will have themself paged and walk out.

Well Al a lot of things come off since the last time I wrote to you. We left Chi Wed. noon and you ought to seen the crowd down to the Union station to bid us good by. Everybodys wifes and sisters and mothers was there and they was all crying in 40 different languages and the women wasn't allowed through the gates so farewell kisses was swapped between the iron spokes in the gates and some of the boys was still getting smacked yet when the train started to pull out and it looked like a bunch of them would get left and if they had I'll say their wifes would of been in tough luck.

Florrie was all dressed up like a horse and I bet a lot of them other birds wished they was in my shoes (p. 10).

Of course wife Florrie and little son Al was there and Florrie was all dressed up like a horse and I bet a lot of them other birds wished they was in my shoes when the kissing battle begun. Well Al we both blubbered a little but Florrie says she mustn't cry to hard or she would have to paternize her own beauty parlors because crying makes a girl look like she had pitched a double header in St. Louis or something. But I don't know if you will believe it or not but little Al didn't even wimper. How is that for a game bird and only 3 yrs. old?

Well Al some alderman or somebody had got a lot of arm bandages made for us with the words Kaiser Killers printed on them and they was also signs stuck on the different cars on the train like Berlin or Bust and etc....