Travels with a Donkey in the Cevennes 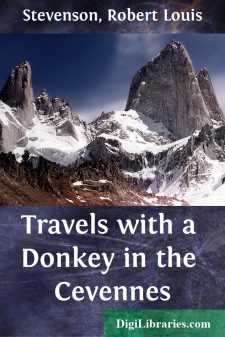 In a little place called Le Monastier, in a pleasant highland valley fifteen miles from Le Puy, I spent about a month of fine days.  Monastier is notable for the making of lace, for drunkenness, for freedom of language, and for unparalleled political dissension.  There are adherents of each of the four French parties—Legitimists, Orleanists, Imperialists, and Republicans—in this little mountain-town; and they all hate, loathe, decry, and calumniate each other.  Except for business purposes, or to give each other the lie in a tavern brawl, they have laid aside even the civility of speech.  ’Tis a mere mountain Poland.  In the midst of this Babylon I found myself a rallying-point; every one was anxious to be kind and helpful to the stranger.  This was not merely from the natural hospitality of mountain people, nor even from the surprise with which I was regarded as a man living of his own free will in Le Monastier, when he might just as well have lived anywhere else in this big world; it arose a good deal from my projected excursion southward through the Cevennes.  A traveller of my sort was a thing hitherto unheard of in that district.  I was looked upon with contempt, like a man who should project a journey to the moon, but yet with a respectful interest, like one setting forth for the inclement Pole.  All were ready to help in my preparations; a crowd of sympathisers supported me at the critical moment of a bargain; not a step was taken but was heralded by glasses round and celebrated by a dinner or a breakfast.

It was already hard upon October before I was ready to set forth, and at the high altitudes over which my road lay there was no Indian summer to be looked for.  I was determined, if not to camp out, at least to have the means of camping out in my possession; for there is nothing more harassing to an easy mind than the necessity of reaching shelter by dusk, and the hospitality of a village inn is not always to be reckoned sure by those who trudge on foot.  A tent, above all for a solitary traveller, is troublesome to pitch, and troublesome to strike again; and even on the march it forms a conspicuous feature in your baggage.  A sleeping-sack, on the other hand, is always ready—you have only to get into it; it serves a double purpose—a bed by night, a portmanteau by day; and it does not advertise your intention of camping out to every curious passer-by.  This is a huge point.  If a camp is not secret, it is but a troubled resting-place; you become a public character; the convivial rustic visits your bedside after an early supper; and you must sleep with one eye open, and be up before the day.  I decided on a sleeping-sack; and after repeated visits to Le Puy, and a deal of high living for myself and my advisers, a sleeping-sack was designed, constructed, and triumphantly brought home.

This child of my invention was nearly six feet square, exclusive of two triangular flaps to serve as a pillow by night and as the top and bottom of the sack by day.  I call it ‘the sack,’ but it was never a sack by more than courtesy: only a sort of long roll or sausage, green waterproof cart-cloth without and blue sheep’s fur within.  It was commodious as a valise, warm and dry for a bed.  There was luxurious turning room for one; and at a pinch the thing might serve for two.  I could bury myself in it up to the neck; for my head I trusted to a fur cap, with a hood to fold down over my ears and a band to pass under my nose like a respirator; and in case of heavy rain I proposed to make myself a little tent, or tentlet, with my waterproof coat, three stones, and a bent branch.

It will readily be conceived that I could not carry this huge package on my own, merely human, shoulders.  It remained to choose a beast of burden.  Now, a horse is a fine lady among animals, flighty, timid, delicate in eating, of tender health; he is too valuable and too restive to be left alone, so that you are chained to your brute as to a fellow galley-slave; a dangerous road puts him out of his wits; in short, he’s an uncertain and exacting ally, and adds thirty-fold to the troubles of the voyager.  What I required was something cheap and small and hardy, and of a stolid and peaceful temper; and all these requisites pointed to a donkey.

There dwelt an old man in Monastier, of rather unsound intellect according to some, much followed by street-boys, and known to fame as Father Adam.  Father Adam had a cart, and to draw the cart a diminutive she-ass, not much bigger than a dog, the colour of a mouse, with a kindly eye and a determined under-jaw.  There was something neat and high-bred, a quakerish elegance, about the rogue that hit my fancy on the spot.  Our first interview was in Monastier market-place.  To prove her good temper, one child after another was set upon her back to ride, and one after another went head over heels into the air; until a want of confidence began to reign in youthful bosoms, and the experiment was discontinued from a dearth of subjects.  I was already backed by a deputation of my friends; but as if this were not enough, all the buyers and sellers came round and helped me in the bargain; and the ass and I and Father Adam were the centre of a hubbub for near half an hour.  At length she passed into my service for the consideration of sixty-five francs and a glass of brandy.  The sack had already cost eighty francs and two glasses of beer; so that Modestine, as I instantly baptized her, was upon all accounts the cheaper article.  Indeed, that was as it should be; for she was only an appurtenance of my mattress, or self-acting bedstead on four castors....