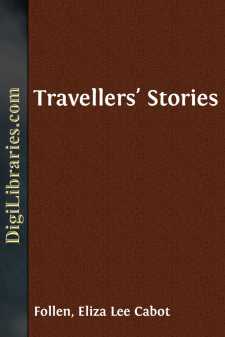 It is the pleasant twilight hour, and Frank and Harry Chilton are in their accustomed seat by their mother's side in the old sofa, that same comfortable old sofa, which might have listened to many pleasant and interesting stories that will never be told.

Mother, said Frank, you have often promised us that some time you would tell us about your travels in Europe. This is a good stormy evening, and no one will come in to interrupt you; so please, dear Mother, tell us all you can remember.

It is now, boys, five years since my return from Europe. Much that I did and saw while there I forget. However, as I have been lately looking over my hasty journal, I will see what I can remember.

On the first of August I set sail in the steamer Caledonia for England. At four o'clock in the afternoon, we were out of sight of land; one by one, we had taken leave of every object which could be seen from the departing vessel; and now nothing was visible to us but the sky, the ocean meeting it in its wide, unbroken circle the sun gradually sinking in the west, and our small but only house, the ship. How strange, how sublime the scene was! so lonely, so magnificent, so solemn! At last the sun set, gilding the clouds, and looking, to my tearful eyes, as if that too said farewell! Then the moon appeared; and the long, indefinite line of light from where her rays first touched the waters to our ship, and the dancing of the waves as they crossed it, catching the light as they passed, were so beautiful that I was unwilling to leave the deck when the hour for rest arrived.

The wind was against us, and we did not get on very fast; but I enjoyed the novel scene the next day, and passed all my time on deck, watching the sailors and the passengers, and noticing the difference between Englishmen and Americans.

On Sunday it was very cold, and the wind, still contrary, rose higher and higher; it was impossible to set any sail, but I still kept on deck, and thus avoided sickness. Soon after breakfast I saw a white foam rising in different places occasionally, and was told that it was whales spouting; I saw a great number, and enjoyed it highly. Presently some one called out, "An iceberg!" and, far off against the sky, I saw this floating wonder. It was very beautiful; such a dazzling white, so calm and majestic, and so lonely; it was shaped, as I thought, like an old cathedral, but others thought like a sleeping lion, taking what I called the ruined tower for his head and mane.

Soon after this, the man on the lookout cried, "Steamship America;" and in a few moments more we saw her coming swiftly towards us with her sails all set, for the wind was fair for her. Captain Leitch then told me that he should stop his vessel and send a boat on board, and that he would send a letter by it if I would write one quickly; to others he said the same thing. In a moment the deck was cleared, and in a few more moments all had returned with their letters; and never was there a more beautiful sight than these two fine steamers manoeuvring to stop at a respectful distance from each other; then our little boat was lowered, and O, how pretty it was to see her dancing over the rough waves to the other steamer! We sent to the America the sad news of the loss of the Kestrel....