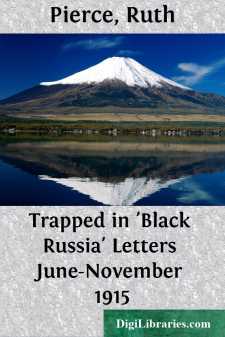 Add to My Favorites
Published: 8 years ago
Downloads: 68
Rating: (0 Votes)

There is no reason why this letter should ever reach you if you consider that it's war-time and that I am in Russia. Still, the censor may be sleeping when it comes along, or I may find a way to slip it over the border under his very nose. I always have a blind faith that my words will reach you somehow.

I am in Russia—without Peter. Don't be frightened, dearests. I came with Marie, and we will go back to Bucharest together in a week. Only a week in Russia. Oh, if the top of my head could be lifted off and let out everything I want to tell you.

We had no difficulty in crossing the frontier. The little Roumanian train took us over a river, and all at once we were out of the make-believe country where the stage always seems set for opéra-bouffe There were no more pretty Tziganes, with disheveled hair and dirty, bare breasts, to offer you baskets of roses and white lilies. There were no Turks in red fezes squatting in the dust, hunting among their rags for fleas, and there were no more slender peasants in tight white-wool trousers and beautiful embroidered shirts. Everything, just by crossing a river, had grown more serious and sober-colored and several sizes larger. Pale-blue uniforms gave place to dingy olive-brown ones.

A porter took care of our luggage. He was exactly what I expected. He wore a white smock with red and blue embroidery at the neck and wrists. His reddish beard was long and Tolstoyan. We followed him into the big, empty railway station, and there a soldier took away our passports and we were left waiting in the douane, behind locked and guarded doors, together with a crowd of bewildered Jews and Roumanians.

"It isn't much like the Roumanian frontier, is it?—where the dreamy-eyed official visés your passport without looking at it—he's so busy looking at you," Marie observed.

"No," I replied. "This is Russia. I am in Russia," kept going through my head, and I felt like Alice in Wonderland, trying to adjust myself to new perspectives.

"I hate getting back here," Marie went on. "It was too good to be in a country, if only for a little while, where they took things easily. If I'd stayed a little longer, I believe I could have laughed myself and felt in a personal relationship toward life again."

That's what I was glad to get away from. You get too personal if you stay in Roumania long. Roumania gets to mean Bucharest, and Bucharest the universe. As I sat waiting in the douane, I felt like puffing out and growing to make room for Russia inside me.

"Can't you hurry our passports?" Marie asked an official. "We want to leave on this train."

The official raised his shoulders helplessly.

"What does that mean?"

The train we were to have taken for Kiev left without us, on tracks twice as wide as those of the Roumanian toy railroad. Only a courier with a diplomatic pouch got on.

"It's like that here, always," Marie said. "No system, no economy of time, or anything else." Suddenly she began to laugh....