Trapped by Malays A Tale of Bayonet and Kris 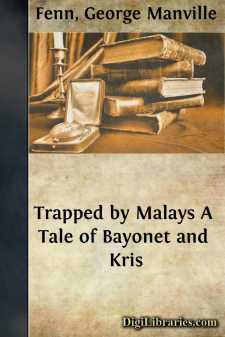 “Oh, bother!” The utterer of these two impatient words threw down a sheet of notepaper from which he had been reading, carefully smoothed out the folds to make it flat, and then, balancing it upon one finger as he sat back in a cane chair with his heels upon the table, gave the paper a flip with his nail and sent it skimming out of the window of his military quarters at Campong Dang, the station on the Ruah River, far up the west coast of the Malay Peninsula.

“What does the old chap want now? Another wigging, I suppose. What have I been doing to make him write a note like that?—Note?” he continued, after a pause. “I ought to have said despatch. Hang his formality! Here, what did he say? How did he begin?” And he reached out his hand towards the table as if for the note. “There’s a fool! Now, why did I send it skimming out of the window like that? It’s too hot to get up and go out to the front to find it, and it’s no use to shout, ‘Qui-hi,’ for everybody will be asleep. Now, what did he say? My memory feels all soaked. Now, what was it? Major John Knowle requests the presence of Mr Archibald Maine—Mr Archibald Maine—Archibald! What were the old people dreaming about? I don’t know. It always sets me thinking of old Morley—bald, with the top of his head as shiny as a billiard-ball. Good old chap, though, even if he does bully one—requests the presence of Mr Archibald Maine at his quarters at—at seven o’clock this evening punctually. No. What’s o’clock? I think it was six. Couldn’t be seven, because that’s dinner-time, and he wouldn’t ask me then. It must be six. Here, I must get that note again, but I feel so pumped out and languid that I am blessed if I am going to get up and go hunting for that piece of paper. Phee-ew! It’s hotter than ever. I should just like to go down to the river-side, take off all my clothes under the trees, and sit there right up to my chin, with the beautiful, clear, cool water gurgling round my neck. Lovely! Yes—till there came floating along a couple of those knobs that look like big marbles—only all the time they are what old Morley calls ocular prominences over the beastly leering eyes of one of those crocodiles on the lookout for grub. Ugh! The beasts! Now, what could crocodiles be made for?—Oh, here’s somebody coming.”

For all at once, faintly heard, the fag-end of the “British Grenadiers,” whistled very much out of tune, came floating in at the window.

“Peter Pegg, by all that’s lucky!”

The footsteps of some one evidently heavily laden came nearer and nearer, till, just as they were about to pass the young officer’s quarters, the occupier screwed-up his lips and gave vent to a low, clear note and its apparent echo, which sounded like the cry of some night-bird.

The next moment there was the sound as of a couple of iron buckets being set down upon the ground, followed by the clang, clang of the handles; a dark shadow crossed the window, and a voice exclaimed:

“What are you doing?”