Translations of Shakuntala and Other Works 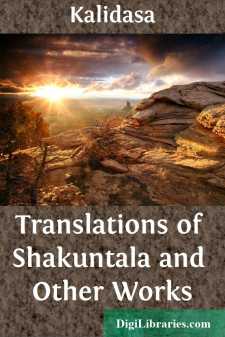 Kalidasa probably lived in the fifth century of the Christian era. This date, approximate as it is, must yet be given with considerable hesitation, and is by no means certain. No truly biographical data are preserved about the author, who nevertheless enjoyed a great popularity during his life, and whom the Hindus have ever regarded as the greatest of Sanskrit poets. We are thus confronted with one of the remarkable problems of literary history. For our ignorance is not due to neglect of Kalidasa's writings on the part of his countrymen, but to their strange blindness in regard to the interest and importance of historic fact. No European nation can compare with India in critical devotion to its own literature. During a period to be reckoned not by centuries but by millenniums, there has been in India an unbroken line of savants unselfishly dedicated to the perpetuation and exegesis of the native masterpieces. Editions, recensions, commentaries abound; poets have sought the exact phrase of appreciation for their predecessors: yet when we seek to reconstruct the life of their greatest poet, we have no materials except certain tantalising legends, and such data as we can gather from the writings of a man who hardly mentions himself.

One of these legends deserves to be recounted for its intrinsic interest, although it contains, so far as we can see, no grain of historic truth, and although it places Kalidasa in Benares, five hundred miles distant from the only city in which we certainly know that he spent a part of his life. According to this account, Kalidasa was a Brahman's child. At the age of six months he was left an orphan and was adopted by an ox-driver. He grew to manhood without formal education, yet with remarkable beauty and grace of manner. Now it happened that the Princess of Benares was a blue-stocking, who rejected one suitor after another, among them her father's counsellor, because they failed to reach her standard as scholars and poets. The rejected counsellor planned a cruel revenge. He took the handsome ox-driver from the street, gave him the garments of a savant and a retinue of learned doctors, then introduced him to the princess, after warning him that he was under no circumstances to open his lips. The princess was struck with his beauty and smitten to the depths of her pedantic soul by his obstinate silence, which seemed to her, as indeed it was, an evidence of profound wisdom. She desired to marry Kalidasa, and together they went to the temple. But no sooner was the ceremony performed than Kalidasa perceived an image of a bull. His early training was too much for him; the secret came out, and the bride was furious. But she relented in response to Kalidasa's entreaties, and advised him to pray for learning and poetry to the goddess Kali. The prayer was granted; education and poetical power descended miraculously to dwell with the young ox-driver, who in gratitude assumed the name Kalidasa, servant of Kali. Feeling that he owed this happy change in his very nature to his princess, he swore that he would ever treat her as his teacher, with profound respect but without familiarity....