Transactions of the American Society of Civil Engineers, Vol. LXX, Dec. 1910 Locomotive Performance On Grades Of Various Lengths, Paper No. 1172 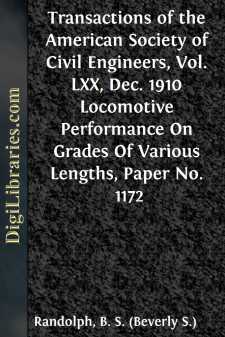 In the location of new railways and the improvement of lines already in operation, it is now well recognized that large economies can be effected by the careful study of train resistance due to grades and alignment, distributing this resistance so as to secure a minimum cost of operation with the means available for construction.

While engaged in such studies some years ago, the attention of the writer was attracted by the fact that the usual method of calculating the traction of a locomotive—by assuming from 20 to 25% of the weight on the drivers—was subject to no small modification in practice.

In order to obtain a working basis, for use in relation to this feature, he undertook the collection of data from the practical operation of various roads. Subsequent engagements in an entirely different direction caused this to be laid aside until the present time. The results are given in , from which it will be seen that the percentage of driver weight utilized in draft is a function of the length as well as the rate of grade encountered in the practical operation of railways.

In this table, performance will be found expressed as the percentage of the weight on the drivers which is utilized in draft. This is calculated on a basis of 6 lb. per ton of train resistance, for dates prior to 1880, this being the amount given by the late A. M. Wellington, M. Am. Soc. C.. E., and 4.7 lb. per ton for those of 1908-10, as obtained by A. C. Dennis, M. Am. Soc. C. E., assuming this difference to represent the advance in practice from 1880 to the present time. Most of the data have been obtained from the "Catalogue of the Baldwin Locomotive Works" for 1881, to which have been added some later figures from "Record No. 65" of the same establishment, and also some obtained by the writer directly from the roads concerned. Being taken thus at random, the results may be accepted as fairly representative of American practice.

Attention should be directed to the fact that the performance of the 10-34 E, Consolidation locomotive on the Lehigh Valley Railroad in 1871 is practically equal to that of the latest Mallet compounds on the Great Northern Railway. In other words, in the ratio between the ability to produce steam and the weight on the drivers there has been no change in the last forty years. This would indicate that the figures are not likely to be changed much as long as steam-driven locomotives are in use. What will obtain with the introduction of electric traction is "another story."

These results have also been platted, and are presented in , with the lengths of grade as abscissas and the percentages of weight utilized as ordinates. The curve sketched to represent a general average will show the conditions at a glance. The results may at first sight seem irregular, but the agreement is really remarkable when the variety of sources is considered; that in many cases the "reputed" rate of grade is doubtless given without actual measurement; that the results also include momentum, the ability to utilize which depends on the conditions of grade, alignment, and operating practice which obtain about the foot of each grade; and that the same amount of energy due to momentum will carry a train farther on a light grade than on a heavy one.

There are four items in which vary materially from the general consensus....