Toppleton's Client or, A Spirit in Exile 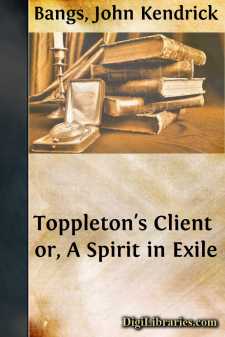 CHAPTER I. INTRODUCING MR. HOPKINS TOPPLETON. Mr. Hopkins Toppleton, Barrister of London and New York, was considered by his intimates a most fortunate young man. He was accounted the happy possessor of an income of something over fifty thousand dollars a year, derived from investments which time had shown to be as far removed from instability, and as little influenced by the fluctuations of the stock market, as the pyramids of Egypt themselves. Better than this, however, better even than personal beauty, with which he was plentifully endowed, Mr. Hopkins Toppleton was blessed with a great name, which he had received ready-made from his illustrious father, late head of the legal firm of Toppleton, Morley, Harkins, Perkins, Mawson, Bronson, Smithers and Hicks. The value of the name to Hopkins was unquestionable, since it enabled him, at his father's death, to enter that famous aggregation of legal talent as a special partner, although his knowledge of law was scant, receiving a share of the profits of the concern for the use of his patronymic, which, owing to his father's pre-eminent success at the Bar, Messrs. Morley, Harkins, et al., were anxious to retain. This desire of Mr. Toppleton's late associates was most natural, for such was the tremendous force exerted by the name he bore, that plaintiffs when they perceived it arrayed in opposition to their claims, not infrequently withdrew their suits, or offered terms upon which any defendant of sense might be induced to compromise. On the other hand, when a defendant found himself confronted with the fact that Hopkins Toppleton, Sen., had joined forces with the plaintiff, he usually either settled the claim against him in full or placed himself beyond the jurisdiction of the courts.

When Toppleton, Sen., died, it was very generally believed that the firm, whose name has already been mentioned at some length, lost not only its head, but also a very large proportion of its brains,—a situation quite as logical as it was unfortunate for the gentlemen with whom Mr. Toppleton had been associated. Nor was this feeling, that with the departure of Toppleton, the illustrious, for other worlds the firm was deprived of a most considerable portion of its claims to high standing, confined to cavilling outsiders. No one recognized the unhappy state of affairs at the busy office on Broadway more quickly than did Messrs. Morley, Harkins, Perkins, Mawson, Bronson, Smithers, and Hicks themselves, and at the first meeting of the firm, after the funeral of their dead partner, these gentlemen unanimously resolved that something must be done.

It was at this meeting that Mr. Hicks suggested that the only course left for the bereaved firm to pursue, if it desired to remain an aggressive force in its chosen profession, was to retain the name of Toppleton at the mast-head, and, as Mr. Mawson put it, "to bluff it out." Mr. Perkins agreed with Mr. Hicks, and suggested that the only honest way to do this was to induce Mr. Toppleton's only son, known to all—even to the clerks in the office—as Hoppy, to enter the firm as a full partner....